Sandvik Steel reports that it has received two large orders for advanced steam-generator tubes, with a total value of approximately SEK 200 M ($27 million). The orders are for high quality, u-bent steam generator tubes for nuclear power plants in the USA supplied in the nickel-base alloy material, Alloy 690 (Plate 2). 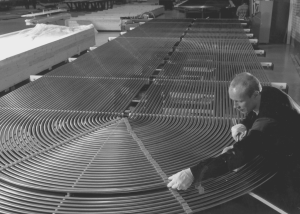 This steel grade is thought to account for the majority of steam generator tubes now being supplied world-wide, as it is considered to have superior corrosion resistance both from primary and secondary side corrosion compared to previously used materials.

The first order, for a nuclear power plant in South Texas, USA was received from Westinghouse who have a contract to replace four steam generators.

Westinghouse, a prominent company in the design and construction of steam generators for PWR nuclear power plants, has a long association with Sandvik Steel in areas of common technical development, particularly concerning the use and application of materials.

The second order is for a nuclear station at Sequoyah in Tennessee, USA where Korean company Hanjung are also constructing steam generators. Operating in the nuclear power sector on a worldwide basis, Hanjung's specification requirements are the most technically stringent in the world for this type of project. An extremely high level of general surface finish is specified and the non-destructive testing standard places demands throughout the manufacturing cycle, from initial tube production up to finished u-bent tubes.

Tubes for both contracts will be delivered to schedule during the second half of 2000 and the first half of 2001.