In the first year since opening its dedicated £2 million microstructures facility, Dorset based electroforming specialist, Tecan has realised significant interest in its ability to produce highly-accurate micro parts at low cost for a wide range of new-generation applications in electronics, aerospace, medical, optics and micro-engineering (Plate 2). In establishing the division the company has discovered that microcomponents and microreplication represent two major areas of growth. 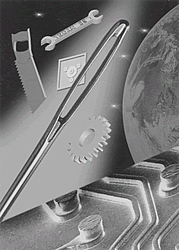 The Tecan process involves electroforming directly onto a 3D silicon wafer original, supplied by the customer, to produce an exact mirror-image replica in nickel. If the original silicon is male or female, defined by the peaks and troughs of its profile, the nickel replica will be of the opposite gender. The process allows this nickel duplicate to be simply separated from the silicon and used for processing, as it is, or as a parent part from which mirror-image “offspring” can be produced, these “sons” or “daughters” will have exactly the same form and gender as the original. This allows expensive silicon originals to be kept as perfect masters, from which any number of replicas, in any gender, can be produced at any time and at comparatively low cost.

In the case of microcomponents, ultra-fine electroformed metal parts fabricated to previously unheard levels of accuracy and resolution, tangible growth is reported across a raft of new-generation application arenas, where previously revolutionary concepts have at present become reality. These micro- applications include sensors, actuators, hearing aids, medical devices, optical instruments, micro-lenses, meshes, masks, displays and micro-fluidic devices. Microcomponents can be manufactured to extremely small scale, with features, such as apertures, fluidic channels or raised lands, down to 2 μm-with tolerances at sub-micron levels. Similarly, the company can produce larger parts, up to 600 mm × 765 mm, with equally fine resolutions.

The new technology is described as a hybrid application based on three established manufacturing technologies – silicon semiconductor; high-volume audio CD; and micro-embossing tools such as those used in micro-lens array and hologram manufacture. The microreplicants and microcomponents are manufactured in an ultra-clean environment with Class 100 and Class 1000 clean rooms. These highly clean areas ensure the provision of particle-free environments where components with sub-micron features can be repeatedly and consistently fabricated.

Exceptional tolerance and accuracy are assured, across the maximum surface area of 600 mm × 765 mm, far greater than most existing silicon capabilities. Raised areas can be produced with a maximum aspect ratio of 5:1, and potentially greater. Extremely accurate features, such as tracks and channels can be fabricated with smooth walls and sub-micron tolerances. Surface smoothness is also exceptionally accurate, being sub-wavelength, at 600 nm across surface (Lambda/4).