The Interkama exhibition held last 18-23 October in Dusseldorf was claimed to be the largest of its type in the world, with about 1,300 exhibitors covering a floor area of 55.000m2 in Halls 7-14. The show was a little disappointing to its organizers, with 60,000 visitors compared with 82,000 at the last exhibition in 1995. About 30 percent of visitors came from abroad, three quarters of them from elsewhere in Europe, and about 80,000 visitors, 25 percent of them from outside Germany.

In the light of experience the organizers are planning some changes for the next Interkama. Last year's show had the expanded and rather ungainly subtitle of "The International Fair for Industrial Communication, Automation, Measurement and Analytics". Next time it will read simply "Automation of Production and Business Processes".

The fair will also change from a three-year to a two-year frequency and will be a day shorter, running from 24-28 September 2001. The reason for this decision is that the market for automation is currently undergoing something of a revolution, marked by fundamental changes on several fronts.

Alongside last year's trade exhibition there was also a "technology market" where universities and research institutions could present their marketable and licensable results, enabling them also to develop closer industrial contacts.

Another feature of the show was the Software Competence Centre in Hall 7, which was displaying software solutions for industrial users of all sizes. Major software houses, agencies and independent computer scientists were represented, and intelligent intercompany software applications were presented for linking production and management software.

An innovation last October was the integration of an international conference on the same site from 16 to 20 October. This was the ISA-TECH conference, organised by the International Society for Measurement and Control, and was open to all visitors to the exhibition. There was also a specialist conference, Chemputers in Europe 5, dealing with software applications in process technology.

The main target of Interkama last year was process industries, though many exhibitors, like Siemens and ABB for example, operate also in other industrial sectors. A number of companies were offering complete plant management software systems, and it was probably the addition of "Industrial communication" to the title that encouraged organizations like the Fieldbus Foundation to participate. The change of name in 1992 will further emphasize this trend.

Rockwell Automation, for example, was stressing its programme of complete automation systems to guarantee trouble-free centralized control for all industrial processes, using technologies that were tried and tested for use especially in metals, paper, food, chemical and pharmaceutical industries. Discrete, continuous and batch processes were claimed to be comprehensively covered by one system.

Honeywell Hi-Spec Solutions introduced its @sset MAX portfolio of software applications and tools, together with expert ASM (Abnormal Situation Management) consulting services. The solutions are claimed to provide sustained plant performance through maximized availability and utilization of assets and elimination of incidents in the process industries.

Siemens presented its range of services as a competent global supplier of components, systems and solutions for process industries under the theme "Get a bit more". Totally integrated automation formed the basis for the whole range of services. Based on a great number of new components and systems, the sector solutions were the focal point of the company's presentations.

Among the individual items of equipment on show was the Sipart PS2 electropneumatic positioner for linear and slewing valve actuators (see Plate 1). It is available in a flameproof version and or 0/4 to 20mA operation or with a Profibus-PA interface.

Irish company Automsoft International is the developer of RAPID (Real time Access Plant lnformation Database) Historian. Claimed to be the world's first true time and batch data archive, and the only such product to be entirely based on an object oriented database core, it has been designed to overcome problems associated with integration of enterprise level and plant level systems. On the plant side it offers the performance required to handle up to a million tags generating up to 25,000 events per second; and on the enterprise side it provides entirely open access to data stored in industry standard formats. 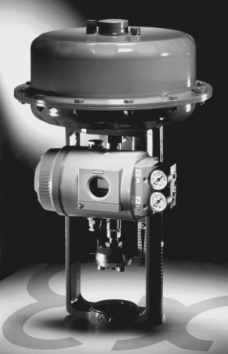 Eckelmann Industrieautomation was offering complete automation solutions for machine manufacturing and plant construction applications, providing solutions from the level of sensors and actuators through the control system level to the host system and its complete integration into a company's information management processes.

Among developments shown by Robert Bosch was a new robot vision system for use with the company's Turboscara SR6 and SR8 robots, which will add to the efficiency and flexibility of the robots (see Plate 2). Integrated into the robot control, the system detects parts even when rotated between 0 and 360 degrees as well as changes in intervals. New parts can be quickly integrated into the production cycle or shortly before production start up via a simple teach-in system. This enables virtually simultaneous product development and integration of production tools. Up to four cameras can be connected to the vision system and they can be attached to the robot arm as well as a stationary location. Special high-speed I/Os control the cameras and lighting. Programming and testing are performed when the robot is tested so that the user has a uniform programming and testing environment. 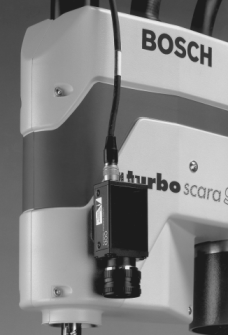