The press line consists of five Japanese-designed Komatsu presses, built under licence by the China National Heavy Machinery Corporation, which is one of China's largest companies. They are the first presses supplied by the company into Europe. The press line also employed local UK systems engineering expertise. 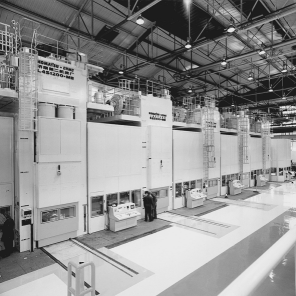 The press line will operate almost continuously over three shifts and over the course of a day can average a net rate of 6,000 small to medium-size stampings, which is considered world-class within the automotive industry for this size and class of machinery. The eight press-tending robots, supplied locally by ABB Flexible Automation, in Milton Keynes, are designed to help the line achieve this high level of throughput.

IBC Vehicles is a wholly-owned subsidiary of General Motors and a sister company to Vauxhall Motors. IBC was established in Luton in 1987 as a successor company to the previous Bedford van operation.