An automated guided vehicle (AGV) system from Indumat has been installed in the Basingstoke factory of lift truck manufacturer, Lansing Linde, to transfer chassis fabrications through a welding cell and from there to a paint plant. These time-consuming and repetitive procedures were previously performed manually using electric pallet trucks.

Efficiency of the cell has been optimised by automating the handling process and at the same time staff have been released to carry out more productive and interesting duties.

The cost-effective AGV system, which was installed in July 1999, is based on a single, battery-powered vehicle called Handimat. No central computer is needed as routeing instructions are entered manually using an on-board keypad. Simple in operation, the system is versatile and may be expanded and upgraded to meet future changes in the transfer process (see Plate 7).

Unlike a conventional AGV, Handimat has a tiller arm which allows it to be used in manual mode away from the inductive guide path. Operators are able to pick up and put down a Euro pallet or stillage containing components and sub-assemblies at various scurfing, hand welding and tacking bays; or to take completed fabrications in and out of the area adjacent to a robotic welding station. 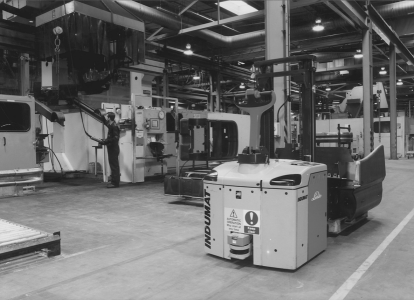 Until required for a specific task, the AGV travels continuously in an anti-clockwise direction around the guide path in forks trailing mode at up to one metre per second. When the vehicle is needed, an operator exposes a reflector at any one of 11 stations around the circuit. A photocell mounted on the side of the vehicle senses the reflector, the exact position of which is adjustable within limits, and stops the AGV after a predetermined distance.

The operator drives the AGV manually into his working area, picks up a load and wheels the vehicle back to the guide wire so that it faces in whichever direction is the shortest route to its intended destination. He then keys in a two-digit code and presses the start button.

In this way, part-finished assemblies are transferred between successive work stations until the complete chassis fabrication has been assembled, after which the AGV transfers the assembly to the robot welding station.

From there, the next destination is one of three extra stations along an auxiliary inductive loop serving the automated paint plant at one end of the cell. Transponders are used to stop the vehicle at these points.

Whenever the AGV is returned to the guide route after being used offwire, the operator can key in three options. It can be returned to its default cycle to await a further instruction; or loaded with a stillage or empty pallets for transport anywhere on the route; or sent repeatedly to and from a particular station where there is demand for frequent material transfer to other areas of the process.

The system operates a double shift, five days a week and the only time it is out of service is for battery changing and routine maintenance. A charge monitor on the AGV signals when a battery change is needed, whereupon the vehicle completes the job in hand and goes directly to the charging area. The nearest operator wheels the AGV off-wire, changes the battery in a matter of minutes and returns it to the guide path.

A forward-scanning laser sensor slows and stops the AGV if there is an obstruction in its path. A flashing light and audible tone warn personnel of the vehicle's presence at all times.

The chief project engineer managing the AGV system at Lansing Linde confirmed that this has been a very successful project, meeting all the objectives which had been set.