MCM Conveyors, a division of Eadie Industries Limited, has successfully commissioned a new overhead conveyor system valued in excess of DM0.5 million for the German luxury car manufacturer, Mercedes-Benz. The new "power and free" system offers the company increased operational flexibility when transporting the bodies of its "E-Class" saloon and estate vehicles around its plant.

MCM in conjunction with its German project partner, AFT, has installed the 800 metre long heavy-duty conveyor system at Mercedes-Benz's factory in Stuttgart. The conveyor has been specifically designed so it can manoeuvre both the saloon and estate versions of the "E-Class" range through several stages of the manufacturing process (see Plate 3).

With each car body weighing up to 500kg, MCM specified its PF 500EH "power and free" overhead chain conveyor. The new system readily controls the flow of product by allowing car bodies to be stopped in predetermined positions where components can be fitted. At the same time the system maximises the use of available roof space while simultaneously keeping the floor space clear. 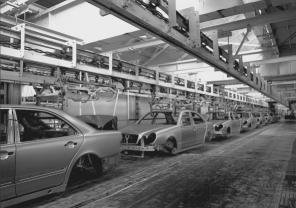 Plate 3Part of MCM's new overhead conveyor system at the Mercedes-Benz factory in Stuttgart. The "power and free" conveyor transports the bodies of "E-Class" saloon and estate vehicles

The key benefit offered by MCM's system is complete operational flexibility - the customer has total control over the flow of product and can match this to the desired production rate.

Unlike conventional chain conveyors where the load is attached directly to the conveyor chain and its routeing is restricted to the area defined by the conveyor's chain layout, a "power and free" conveyor uses a trolley and loadbar assembly to move the load. With the Mercedes-Benz contract the trolley system had to be adapted so it could transport both versions of the "E-Class" range.