Built-in access windows for PLCs an industry-first from Keyence

Built-in access windows for PLCs an industry-first from Keyence

Data can now be checked on start-up, during changeover, or when being modified without the need for a PC or hand-held programmer. The access window allows programs to be checked and precise online adjustments to be made to internal devices such as the timer while the PLC is still operating. 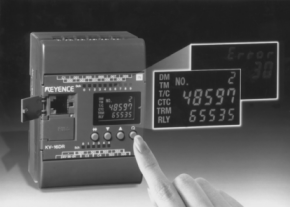 Designed with user-friendliness in mind, the KV Series includes a number of other features to make operation quick and simple. One is size. At typically two-thirds that of conventional AC-type PLCs, the slender design of the KV Series not only saves mounting space, but allows the entire system - including the distribution panel and the control box - to be reduced in size too.

Processing speed is increased by 50 per cent, compared to that of Keyence's other products, making the new series the fastest in its class. Minimum scan time is 140µs, while minimum instruction execution time is 0.7µs. Use of two-channel, two-phase counters and counter comparators eliminate the need for an additional high-speed counter. This makes the KV Series ideal for applications such as speed measurement and high-speed interval counting.

Incorporation of a single-axis stopper motor control, which is independent of the high-speed counter function, allows control of motors up to 50kHz. This gives the KV Series the control function of more expensive units, but for a lower cost. Setting the output frequency on the access window allows the series to be used as a simple stepper motor controller.

A frequency counter-function measures the rotational frequency of a gear or rotary encoder without the need for complicated programming. The measured result is automatically input in the specified data memory from where it can be displayed on the access window. The series can also function as a simple cam switch when connected to an inexpensive rotary encoder.

The series includes Ladder Builder for KV software, which ensures fast, easy programming and efficient desktop debugging. Ladder Builder can simulate program executions even without being connected to a PLC. It can easily identify complex operation problems, while simultaneously displaying multiple timing charts of any devices. Editing is also simple, using Windows functions to enter data entry from a keyboard or mouse. A built-in autosave function backs up the program at pre-determined intervals, protecting data against any power losses or system crashes.

All fully-equipped with access windows, 12 types of base unit are available for the KV Series. They range from the KV-10AR AC relay unit with six inputs and four outputs, to the KV-40DT DC transistor with 24 inputs and 16 outputs. Expansion is also simple, with eight types of I/O unit available, all of which can be mounted up to 300mm away from the adjacent unit.