A contract worth almost £500,000 to equip the chassis assembly line for the new Land-Rover Tempest vehicle range has just been completed by Coventry-based Expert UK Ltd.

Precision transfer and positioning equipment from Expert has been used by ABB and UPF Thompson Chassis of Wolverhampton to control the movement of chassis fabrications as they are processed at each of 15 individual assembly stations comprising the new line.

At 97 metres in length, the track is one of the largest of its type anywhere in the world (Plate 3). It is split into two sub-lines and incorporates five automatic welding stations - each equipped with four ABB robots that produce up to 1.5 metre long seam welded joints during each cycle. 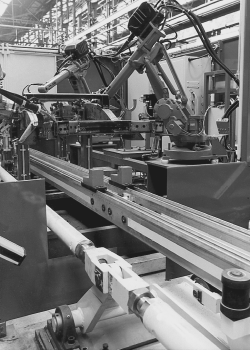 According to Roger Harris, site manager for ABB: "Design and planning accounted for almost two years' work on the project. In addition, we were on site for several months completing final installation and commissioning."

"Expert was chosen to supply the transfer equipment because of its proven reliability and performance. The company's hardware has performed well at other installations we have undertaken for motor industry OEMs, giving us the confidence to specify it again to meet the requirements of this demanding application", Harris added.

In operation, chassis side rails are positioned manually and located by shot-bolts on cradles at the beginning of the line. After these have been tack welded to cross-members to form a basic ladder structure, the Expert equipment traverses the units in six metre increments to the second and subsequent assembly positions for further fabrication operations to be carried out. Light beam or micro-switch controlled guarding is incorporated at each assembly station or robotic welding cell to provide fully interlocked safety protection.

At workstation 8, the chassis units pass from the first to second stage sub-lines. The part built structures are subsequently inverted on a turnover unit at station 10, before progressing through the remaining assembly positions, where underside components are added.

When the line is operating at full capacity, a completed chassis is produced every 3.5 minutes during round-the-clock production at the Thompson Chassis plant in Wolverhampton.

Commenting on the order, Expert UK's general manager, Angelo Luciano said, "We were extremely pleased to be selected for this high-profile project, as it endorses the capabilities of equipment we supply to many of the world's leading motor manufacturers. It follows the recent announcement of a £1 million contract for a similar installation at Chrysler's vehicle assembly operations in Mexico and I am sure will lead to further major business opportunities for us in the automotive sector during the next few months."