Joanna Bertoni, policy adviser at the Transport, Environment and Taxation Division of the UK Department of Transport, Local Government and the Regions (DTLR) describes the business benefits of adopting cleaner fuels.

Over the last few years there has been considerable research and development activity making steady improvement in the environmental performance of road vehicles. Thanks to tough European emission standards and the wider availability of cleaner fuels, modern vehicles emit far less pollution than vehicles produced just ten years ago. This improvement will continue over the coming years as even tougher standards come into force.

However, it remains the case that road transport is a major source of emissions of pollutants that are harmful to both our health and our environment, particularly in our larger, more congested cities. This is a result of both the sheer numbers of vehicles on our roads and the fact that while new vehicles are very clean, there are still substantial numbers of older, more polluting vehicles. Road transport is also a significant source of greenhouse gases, such as carbon dioxide, that are linked to global warming. Clearly then, if we want to improve air quality and tackle climate change, we need to reduce emissions from transport.

So, what can individual organisations do to help protect the environment? Perhaps most obviously, when it comes to buying or using vehicles there is much that can be done by choosing from among the cleanest, most fuel-efficient vehicles. There are potential business benefits from lower fuel and tax bills.

There is a range of alternatively fuelled vehicles available on the market now, that fleet managers can consider, and emerging technologies that will become more widely available within the next few years.

Liquefied petroleum gas (LPG) and compressed or liquid natural gas vehicles can offer significant reductions in harmful emissions that impact on local air quality and climate change. These are also substantially quieter that their diesel counterparts. UK government departments such as the Department of Work and Pensions have a large number of LPG vehicles within their fleet.

Electric vehicles are zero emission at point of use. Even though pollution is transferred to the power station where the electricity is generated, this is generally outweighed by the benefits of replacing a conventional petrol or diesel vehicle in an area of poor air quality.

Hybrid and fuel cell vehicles are two of the most promising emerging technologies. Hybrid vehicles use a combination of conventional fuels and electricity and offer significant advantages in terms of both fuel economy, and reduced emissions of CO2 and local air pollutants. Fuel cells combine hydrogen and oxygen to produce electrical energy and promise to be significantly cleaner and more efficient that conventional vehicles.

The market for alternatively fuelled vehicles in the UK is rapidly expanding, thanks largely to the relatively low rate of duty on clean road fuels and the incentives offered by the DTLR-sponsored PowerShift programme – which aims to develop a sustainable market for clean fuel vehicles. Many public sector bodies (unfortunately not government departments or agencies) can qualify for grants towards the costs of buying cleaner fuel vehicles such as LPG. Under the current system, gas vehicles or conversions can qualify for grants if their emissions performance is better than the equivalent petrol or diesel vehicle, with the highest grants going to those that offer the greatest emissions benefits.

If your organisation would like practical help in cutting fuel costs, then joining Motorvate – a Government-backed award scheme, may be the answer. Organisations joining Motorvate will be advised by energy, transport and environment experts on the benefits of buying greener vehicles, achieving better environmental performance and the best techniques for achieving fuel savings. Motorvate offers a telephone hotline, on-site help and a range of supporting information. The core target is a reduction of 12 per cent in your fleet's total carbon dioxide emissions over a three-year period, 3 per cent of which must be achieved through reduced business mileage. A typical 200-strong car fleet could save around £34,000 per year by meeting these targets.

Buying a car with lower CO2 emissions can save you up to 45 per cent in running costs.

You will not just save on your Vehicle Excise Duty. Because CO2 emissions depend on fuel efficiency, you will also save on running costs as well as doing your bit for the environment. It pays to think carefully about your choice of car, as even similarly sized cars can vary in fuel efficiency by up to 45 per cent. Take these two similarly sized saloon cars shown in Table I for example. 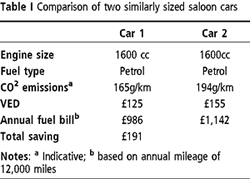 Fuel economy is very important to fleet managers, and cars of a similar size and using the same type of fuel can vary by as much as 45 per cent. So choosing a more fuel-efficient vehicle can both save your organisation money and benefit the environment. The Vehicle Certification Agency provides information on the fuel economy and emissions performance of all new cars and is a useful way of comparing the environmental performance of cars before deciding what to buy.

The refuelling infrastructure for LPG – the most viable alternative to conventional fuels for cars – is growing rapidly. The 1,000th LPG refuelling site was opened recently by Transport Minister David Jamieson and Energy Minister Brian Wilson, and this number continues to grow on almost a daily basis. The basis of a national refuelling infrastructure is now in place and drivers are able to get access to this cleaner fuel more easily that ever before.

Reducing pollution from road transport in the face of increasing levels of traffic is a continuing challenge – we cannot afford to be complacent. Government, vehicle manufacturers, fuel suppliers and transport operators must continue to work together to ensure that full advantage is taken of the environmental benefits offered by cleaner fuels and vehicles.