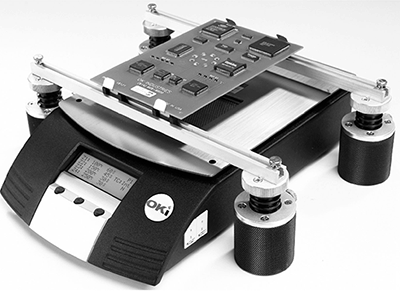 The PCT-1000 features an “external” thermocouple input. This mode of operation can be used for precise control of output temperature based on the board or component temperature. For example, an application may require output not to exceed a specific temperature in order to prevent bottom-side reflow of components. A Type K thermocouple can be attached to a component, or PCB site, to provide target temperature feedback control to the PCT-1000 and therefore prevent exceeding the maximum temperature at the board.

The thermocouple input feature can also be used as a process monitor where the temperature of up to two sites on the PCB can be displayed. This feature provides thermal data and facilitates fast, efficient process set-up parameters.

The PCT-1000 has a unique heater design that creates a convection vortex, effectively concentrating heat where it is most needed. This allows the system to heat more efficiently while operating at lower wattage. The system can be operated in either manual mode, where the output temperature is held constant and the user determines the time for heating or a programmable automatic mode where the temperature and time can by independently varied creating thermal profiles. Up to 50 thermal profiles can be stored in the PCT-1000.

To compliment the PCT-1000, OK International offers a new, optional board holder. The BH-1000 Board Holder is designed for fast and easy configuration. It consists of two independent post-rail assemblies. These assemblies can be positioned as close as 12 mm or as far apart as the user desires. Each post-rail assembly is 300 mm long and has a 30 mm height adjustment. Even more, the rails can be removed from the posts and the post can be used with tapered pins that are included in a kit to function as either a board support or as stand-alone board holders.