It must be said from the start that the subject of this book is marginal to this journal, although there is some overlap. When I first saw the cover illustration – a 0.18 m CMOS transceiver die in the 5-6 GHz bands – (Plate 1) and title, I imagined that it was going to be a rather dry "how-to" work on driving the CAD system for the actual die production. I was totally wrong. It is a full fledged engineering book, going back to first principles, and a good one, at that. Despite being full of equations (many of which were beyond my understanding, having done my RF engineering studies when UHF was still an adventure with such things as Barkhausen oscillators and microwaves were essentially klystrons and pulsed magnetrons for radar), the author's style is easy to read and even quite humourous. 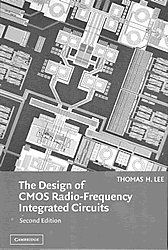 I was very much at home in the opening two chapters, which were in the form of a brief historical survey of RF communications from the spark transmitter through to third-generation mobile handsets. In fact, it was fascinating reading, as it took me back to the spark transmitters and crystal sets I made as a kid! I found it instructive, too. For example, I didn't know that the first solid state RF amplifiers and oscillators, using a zinc mineral as semiconductor, date back to 1922, a quarter of a century before the transistor saw the light of day. This was the work of a Soviet Engineer, Oleg Losev. Even less did I know that Henry J. Round published a paper describing orange, yellow and even blue LEDs in …1907, yes, nearly a century back. He used Carborundum (silicon carbide) as his semiconductor. When I was a student, we all learned that Lee de Forest invented the triode, the first thermionic valve (vacuum tube for my American readers) capable of amplification. As such he was almost adulated. What we didn't know then was that he was an opportunist, plagiarist and even a convicted fraudster. Dr Lee points out that he didn't even realise the amplification potential of his invention, which was only a means of circumventing an Edison patent for the diode as a detector.

The book then discusses the standards for cellular telephony, and the way they work, WiFi, Bluetooth and other modern SHF systems, including those for unlicensed modes such as are used for garage door openers, RC toys and so on. The crunchy part of the book starts with chapter 3, describing RLC networks, most of which is AC theory at 2nd or 3rd year student level, even in my days. This is followed by a chapter on passive devices as may be configured within an IC chip, aslumped components but also laying the groundwork for distributed ones. The fifth chapter goes through the physics of FETs, MOSFETs and similar configurations, ending up at the derivation of Spice models. We then come back to a detailed treatise on distributed systems, so important at giga hertz frequencies. A little dated in this age of computers is the Smith chart, which I had almost forgotten existed, even though it gives a pictorial view of transmission lines. Incidentally, there are a couple of pages here on units. This well-expressed digression is required reading for every engineer, technician or even purchasing manager and a subject close to my own heart; I shudder, every time I see units misused, yes, even in this august journal. This is followed up with techniques for estimating bandwidth and enhancing it within the amplifier design; it was refreshing to see that the shunt-peaked amplifiers present today are almost the same as I used in my dissertation on colour TV in 1951 (except for the nature of the active components, of course!).

The tenth chapter is based on applying bias voltages to the semiconductors, derived from bandgap voltage references, while the next one is all about the very thorny subject of noise. In this day of digital communications, noise is perhaps of less importance, but the grey area of reliable bits is still a problem. Low noise amplifier design is therefore, a natural follow-on. When Armstrong designed the first superheterodyne receiver in 1917, he could not have realised that this same idea would still be used in 2004 in such a wide range of radio (or, synonymously, wireless) devices. The heart is, of course, the mixer, such a simple but misunderstood contrivance; Dr Lee states, "…electrolytic cells, magnetic ribbons, brain tissue and rusty scissors…" can be used, as well as traditional thermionic and semiconductor devices. An extensive chapter on feedback systems (negative and positive) follows. Power amplifiers are then treated (a class A power amplifier is "…a standard, text-book, small-signal amplifier on steroids."). I admit that I learnt a lot in this chapter, as this is the first time I have encountered constant envelope amplifiers of classes D, E and F (maybe this is an admission of how out-of-touch I am!). However, I was very happy to see that the good old Heising modulation is still used on the classic class C PAs.

One of the most important electronics concepts developed mainly since the second World War isthe phase-locked loop (PLL), used in FM receivers, TVs and all sorts of other devices based on frequency synthesis. Chapter 16 discusses various types of PLLs in detail, naturally followed by another on oscillators (Isee the names of Pierce, Hartley, Colpitts and Clapp in use currently.) and synthesisers. The term "phase noise" is new to me, although the concept is not; we considered it simply as an anomaly causing difficulty in tuning a receiver under some conditions, without actually putting a name on it, other than "interference". There is a lengthy chapter offering counsel on how to minimise it. The chapter entitled Architecture is quite complex, illustrated with such analogies as the computer mouse to illustrate phase quadrature, leading onto the actual chip design. The final chapter goes back to the historic start and illustrates a sampling of milestone RF devices throughout the 20th century, complete with circuit diagrams.

As I stated, the book is easy to follow for an esoteric technical work, aided by an eagerness to find the next spark of humour that helpfully illustrates a point, in the tradition of the lectures of Richard Feynman. It is written in the US vernacular and lavishly endowed with page footnotes, some serious references, others more light-hearted. Each chapter has a set of problems at the end for the student to do (and no "crib" to allow him to cheat!). It is well printed and the line illustrations are perfect (even if the component symbols are also in the US vernacular). The line spacing and character font are easy on the eye and the mathematical equations are well-spaced and clear. The index is outstandingly excellent.

Other than every latter-day student of RF engineering, who should read this book within the context of the readership of this journal? Ifirmly believe that it would be useful for anyone designing or assembling RF circuitry, even if he buys – or has made for him – his ICs. The interconnections between the chips still follow exactly the same rules as within them. Even with COB techniques, the wire loop between the die and the PCB, whether it be an MCM or a mother board, offers more inductance than may be affordable at 3 or 5 GHz and this could make or break the performance of an assembly (not to mention etched lumped or distributed components on a PCB, ideal in the UHF range).