It is with great sadness that The SMART Group announces the sudden death of its Chairman Alan Jones (Plate 1).

Alan was a very active participant in the Group over many years, serving on the Technical Committee and more recently he was voted onto the Steering Committee of the main board. In 1998, he was elected to the position of Chairman. He was instrumental in guiding the Group through the difficulties experienced in the electronics industry in recent years and was a keen supporter of SMART links with all the Nepcon exhibitions. 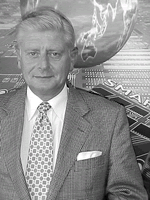 In 1992, Alan was appointed general manager of E-Tronics, a company in the Caulfield Group, based in Galway Ireland.

More recently Alan was one of the first entrepreneurs to see opportunities in what was the former Eastern Bloc countries, he was instrumental in setting up E-Tronics SRO in the Czech Republic and E-Tronics KFT in Hungary, being managing director of both.

Despite a heavy workload with E-Tronics, Alan did not miss UK Committee Meetings.

Prior to his work at E-Tronics, he was technical sales and development manager with Hi-Tron and spent many years working for ICI Chemicals.

Alan was proud to have been a founder member of The SMART Group Ireland, which was set up in 1987. His colleagues in Ireland and on the UK committees will miss his charm, sense of fun and exceptional business acumen.

Vice Chairman Peter Marshall commented, “This sad and tragic loss has been heartfelt by all those who worked and served with Alan on the SMART Group Steering and Technical committees. As Chairman for the past 4 years, Alan’s direct and determined manner, together with his strong negotiating skills, has guided and strengthened the Group, his jovial presence will be greatly missed.”

He was 52, a keen fisherman, and leaves his dear wife Iris and two children.

SMART Group meetings will be much quieter and Alan Jones will be sadly missed. Rest in Peace.