Following the landmark event where the results of the DTI commissioned report on lead-free soldering were presented, SMART decided to update the industry of the many lead-free soldering activities since last year. Held on the same date, 10 February, and same venue, Wycombe Football Club, over 200 delegates attended, exceeding the attendance last time (Plates 1 and 2). 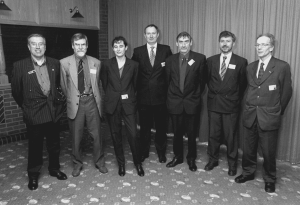 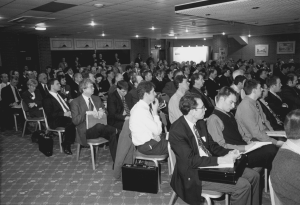 The opening speaker, Nick Jolly from the Department of Trade & Industry, updated on the legislation, which is currently still being considered before publication. He outlined the probable changes to the most recent draft and outlined his own feeling. Nick suggested, as many other speakers did during the day, that the legislation is not now the issue, it's a commercial issue.

Kay Nimmo from ITRI presented the latest on alloys, reiterating her (and PCIF) choice of tin/copper/silver as being a universal alloy to meet most of the needs of the industry. After a number of trips to Japan, Kay was able to present the activities of Japanese producers and their early timetables, committing them to be lead-free ahead of the rest of the world. There were a number of comments on the availability of lead free components and the improved yields seen during assembly, which provoked a number of questions.

The US industry is now following the lead of the UK, especially with their recent US event IPCWorks. Chris Tanner, Nortel Networks gave an overview of the work of NEMI (National Electronics Manufacturing Initiative) and HDPUG (High Density Packaging Users Group). It is interesting to note the number of different initiatives that are currently underway on the evaluation of different materials. It is unfortunate that there seems to be a lot of duplication of effort in various projects.

A component overview was given by Rick Aliwell on behalf of the FEI that illustrated what one company had already done to provide lead free products to the military market. It was also pointed out by Rick that a lot more work had to be done on power devices, and the component industry in general needed more collaboration.

An excellent user experience was given by Gerry Andrews of Marconi Communications, under the title "A lead-free user perspective". Gerry is one of the few who have practical experience in manufacture with lead free alternatives. During his presentation he provided some results on material testing, inspection criteria changes and a view on the issues still to be tackled. Gerry Andrews' comments can be heard on the NPL Interactive CD-ROM available from the SMART Group.

Jim Vincent of Caswell Technology updated the IDEALS conclusions. After an initial introduction to the IDEALs project in general he provided the results of reliability testing on each of the alloys as well as failure modes of joints. An excellent presentation conducted in his normal authoritative manner.

This presentation also offered specific information on the best choices for materials for the future.

The NPL produced "Lead-free cookbook"; an interactive CD-ROM providing "all you ever wanted to know" about the subject, was then shown. Each section of the cook book was presented as it is a unique opportunity for engineers to see the results of the NPL activities. This is a totally unique product and the first product of its type in the world.

There are distinct advantages and implications for using nitrogen in the process when lead-free soldering. Dr Chris Hunt revealed the results of the National Physical Laboratory's work in this field. It clearly demonstrated that the use of nitrogen could improve the degree of wetting of many surface coatings. As the improved wetting occurred, the speed to solder with different alloys was increased. Chris illustrated that with this improved performance the process temperatures used during soldering could be reduced if the thermal demand of the product being soldered was not the significant issue.

Martin Wickham, Soldering, Science & Technology Club, was added to the programme due to the commitments of another speaker. Martin's presentation helped further with the issues with device reliability after lead-free processing. Following this presentation the SMART Group hopes to organise a components day dedicated to components for a lead free process.

The day was summed up with a hard hitting overview by Dr Brian Richards, who was particularly critical of the lack of funds from the DTI, to pursue the conclusions from the DTI commissioned report, known as the "blue book".

Brian outlined some of the work which needed to be done to familiarise small and medium companies on the implementation requirements on lead free, hoping that the DTI would support future projects.

All the previous presentations were non commercial. A fun final session allowed suppliers five minutes (not a second more!) to say how they were meeting the challenge of lead-free soldering. Seven companies took up the challenge: A D Automation, Crossflow, Conceptronic, Concoat, ECD, KIC and Speedline. Surprisingly, none of the presentations took longer than five minutes and it did give some indication where suppliers were putting their emphasis for the future. 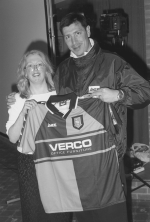 A total of 20 exhibitors helped to make this a very successful day for SMART.