PMJ automec has expanded its range of advanced final assembly cells with the introduction of the HiSAC 1502 (Plate 5). The HiSAC 1502 delivers twice the through-put of standard assembly cells by unitizing PMJ's dual head configuration. Employing two, fully independent robotic heads, the 1502 offers users unrivaled flexibility and rapid reconfiguration - in a system that has a compact 1.5 meter footprint. 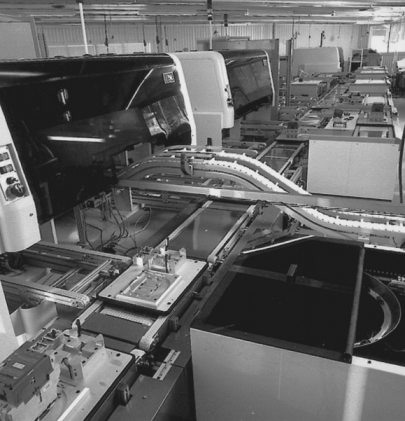 Unlike traditional dual beam arrangements, the 1502's dual independent heads are positioned side-by-side for maximum speed and versatility. Both heads can perform a myriad assembly functions - from screw driving for final assembly to odd form placement, soldering and more. The HiSAC 1502 can be configured for final assembly applications with both heads performing screw driving applications. But users can quickly configure the robotic heads to work independently. To ensure maximum uptime, PMJ's final assembly cell can be re-configured for product changeovers within minutes.

For assembly applications both heads utilize a dedicated servo gripper that allows the 1502 to pick up a vast array of different sized final assembly components. This is combined with an automatic tooling (or finger change) mechanism that allows an equally wide range of different shapes to be accommodated.

Because screw driving is one of the most common manual final assembly operations, the HiSAC 1502 includes a screw driver capability that can be easily configured as an option as and when required.

The HiSAC 1502 uses an advanced feeder interface that can accept components supplied in almost any format from tray to GPAX, tube or special feeders.

As with all HiSAC systems, PMJ offers an extremely extensive service and support network designed to maximize system uptime. This includes 24-hour support, expert operator training, a large inventory of spare parts, standard fault diagnostics systems on its machines and easy to use software.