The tin industry's technology centre, ITRI, has formally launched its new initiative, SOLDERTEC, the Lead-Free Soldering Technology Centre, with an open day and seminar (Plate 1). The new centre is based at the HQ Laboratories of ITRI located ten minutes from London Heathrow airport. The 100 visitors who attended the launch came to hear the latest information on legislative moves within the European Union which could encompass a ban on the use of lead in solder under the draft WEEE directive (Waste Electronic and Electrical Equipment). Kay Nimmo, director, Research & Development at SOLDERTEC, also reported on the initiatives being taken in Japan and the USA. Marketing Director Jeremy Pearce explained ITRI's role in setting up the SOLDERTEC initiative, to ease the way for the industry to assess the new technologies that will be needed to cope with alternative materials. 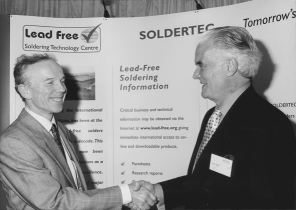 ITRI research into lead-free alloys for soldering has been going on for over ten years, more recently concentrating on the use of lead-free solder alloys in electronics manufacturing. ITRI has a long standing reputation in the field, hence its participation in the writing of "Analysis of the current status of lead-free soldering", a warmly received report commissioned by the UK Department of Trade and Industry (DTI).

Tim Reynoldson of the DTI's Communications and Information Industries Directorate was the guest of honour and opened the event on the day. As a long-standing member of ITRI's research consortium, Roger Massey, Motorola also congratulated ITRI on the launch. In addition to the seminar, visitors were able to tour the laboratory facilities and talk to the research team about the development and testing of alloys, particularly under prototype manufacturing conditions.

A major announcement of a multipurpose alloy was made with the issuing of a data sheet on the generally accepted candidate replacement alloys together with a recommendation that alloys within a certain composition range of the tin-silver-copper system should be accepted as a general replacement for tin-lead. This alloy type has been chosen by ITRI experts as it appears to be suitable for surface mount, wave or hand soldering and for use in a variety of product types. It can be used as a multipurpose lead-free solder.

SOLDERTEC says that there now appears to be general agreement, certainly within UK industry, on the acceptability of Sn-Ag-Cu as a replacement for Sn-Pb. The SOLDERTEC recommendation of this alloy system is supported by the UK trade organisation PCIF (Printed Circuit Interconnection Federation), and UK solder suppliers; Alpha, Heraeus, Indium Corporation, Kester, Multicore and Senju. PCIF chairman, Brian Haken, who attended the SOLDERTEC launch, commenting on the release of the recommendations said, "The electronics manufacturing industry has been aware for some time that tin-lead solder will have to be eliminated and that there is no 'drop-in' replacement available. With more than 70 alternative alloys on offer, this needs narrowing down of the choice to a small family of alloys is precisely what the industry needs".

To accompany the seminar and other activities at the launch, there was an exhibition attended by companies drawn from solder and equipment manufacturers such as Seho (UK) and Hitachi.

These Japanese companies have been at the forefront of implementing lead-free technologies into their own production lines and ITRI was delighted to recognise the contribution in particular of Dr Kenichiro Suetsugu of Matsushita Electric Industrial's Circuit Manufacturing Technology Laboratory, by announcing him as the first recipient of a SOLDERTEC Award for Achievement in Lead-Free Soldering Technology. He has been working in the field for some years and has pioneered the devdopment of lead-free alloys from the laboratory to the production line, culminating in lead-free products such as the Mini Disk player that was on show at the SOLDERTEC launch.