Two excellent pieces of research were rewarded by the SMART Group at the Nepcon Ireland show (Plate 1). One project resulted in savings estimated at $1.3 million per year. The other focused on the topical subject of lead-free, replacing lead based solder in surface finishing of devices.

Paul Dennehy was recently promoted to senior manufacturing engineer in recognition of his work on this project and his prize from SMART was a trip to Nepcon-West in Anaheim, California. This includes return air ticket, hire car, hotel and £500 spending money. 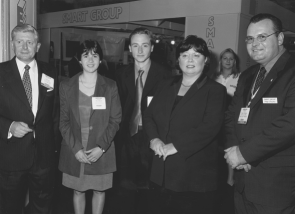 Paul recommended a significant process change to an assembly section of the surface mount line, achieving major cost and headcount reduction with an increase in productivity.

The main change to the process was moving from vacuum transfer, using solder preforms, to a pin transfer system using solder paste. Increased yields, with a reduction in equipment and facility requirements, were also achieved.

The changes have been implemented at Paul's company General Semiconductor Ireland, with annual savings estimated at $1.3 million.

Mary Russell, a process engineer specialising in plating, won the SMART Student of the Year Award and a cheque for £500 for her "Study to determine a suitable replacement for lead based solder for surface finishing of devices". This work was part time for a Master's course at the NMRC, University College Cork.

Mary evaluated lead-free finishes for component terminations including Sn/Bi, Sn/Cu, 100% Sn, Au, OSP, Ag, Sn/Pb. These were re-flowed with three binary alloy attachment pastes - Sn/Ag, Sn/Cu and Sn/Pb. Au on Ni on Cu was used as a lead-free finish on the boards. Taguchi methods for design of experiments were used to obtain optimum plating and reflow conditions. Visual inspection, shear tests, electrical testing, reliability testing and metallurgical analysis was used. The results of this work show that 100 percent tin or gold produced reliable lead-free component finishes from a cost, processing, manufacturing and reliability aspect. Mary's company are fully aware of the possible pending lead-free legislation and further work is ongoing.

The SMART Group Awards are presented annually, the object being to encourage the participation of industry and education, recognising exceptional work by students, whilst also raising the awareness of the group.