First produced from bulk graphite in 2004 by a group at the University of Manchester, UK, graphene is a two-dimensional form of carbon with a hexagonal structure and an interatomic spacing of 0.14 nm (Figures 1 and 2). Manchester’s Andre Geim and Konstantin Novoselov received the 2010 Nobel Prize for physics for this discovery. Graphene is attracting huge interest from the solid-state physics community and is also viewed as a possible candidate for future generations of nanoelectronic devices. Three major areas are causing excitement: graphene is the first example of a two-dimensional atomic crystal, whose very existence improves our understanding about the thermodynamic stability of low-dimensional systems. Second, its electronic properties are very peculiar: electrons and other charge carriers behave as though they do not have mass. In conventional materials, the speed of electrons is related to their energy but this is not so in graphene. Although they do not approach the speed of light, unbound electrons in graphene behave much like photons, mass-less particles that move at a speed independent of their energy. This rather weird behaviour is associated with other strangeness: when conventional conductors are placed in a strong magnetic field, charge carriers begin moving in circular orbits that are constrained to discrete, equally spaced energy levels. In graphene, these levels are unevenly spaced because of the “mass-less” electrons. Lastly, many properties of graphene are superior to those of other materials (Table I), suggesting use in a variety of applications ranging from electronics to advanced composites. The high electron mobility is apparently due to the mass-less behaviour of the charge carriers.

Figure 1 Schematic of the atomic structure of graphene 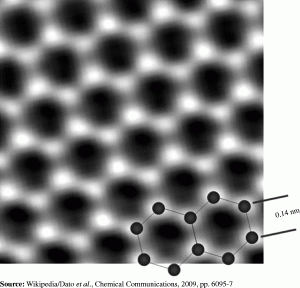 Table I Selected properties of graphene

As with most novel electronically active materials, the sensor research community is actively investigating graphene’s capabilities and devices that respond to gases, chemical species and physical variables have been reported. While it is too early to judge the true commercial potential of these, the following sections illustrate the scope of the research effort.

Workers from Purdue University propose using a graphene-based field effect transistor (GFET) to sense ionising radiation. In a 2009 publication, the group describes an approach which exploits the sensitive dependence of the electrical conductivity of graphene on a local electric field. This can be changed abruptly by the charge carriers produced by ionising radiation in an underlying absorber material such as InSb. The absorber would be electrically gated and separated from the graphene by a thin dielectric buffer layer. The sharp transition in resistance as a function of electric field allows the graphene to act as an in-built preamplifier. A gain in operation speed is expected as dual-gated GFETs have been shown to exhibit cut-off frequencies as high as 50 GHz, which is far higher than those of silicon MOSFETs of comparable size. The work was supported by the US National Science Foundation and the Department of Homeland Security’s Domestic Nuclear Detection Office. Graphene’s broad optical absorption band suggests possible uses as a photodetector for non-ionising radiation but electrons and holes created in the material by incoming photons recombine very rapidly, meaning that there are no free electrons to carry current. Undeterred by this apparent restriction, researchers from IMB’s T.J. Watson Research Centre in New York have managed to separate the electron-hole pairs using internal electric fields and reported the first graphene photodetector in 2009. This separation was achieved by placing palladium, titanium or other metal electrodes on top of a multilayered or single-layer graphene structure. The metal fingers, which have different work functions, produce electric fields at the interface between the electrodes and the graphene which effectively separates the electrons and holes. Thus, a photocurrent is produced when the device is illuminated. The resulting “in-built” fields act on the entire area of the device and no bias voltage is required, which eliminates unwanted noise. A maximum photoresponsivity of 6.1 mA W−1 was achieved at a wavelength of 1.55 μm and operating at frequencies of up to 40 GHz, the device could find uses in future optical communications networks. Interestingly, a team at the University of Texas with colleagues at Rutgers University have recently observed a surprisingly strong infrared absorption band at 12.5 μm in graphene oxide. This result is unexpected and might lead to a variety of future, high performance nanophotonic devices such as thermal-infrared sensors for night vision systems as well as electron emitters and band-pass filters.

As early as 2007, the Manchester group who discovered graphene proposed using it to detect gases. They showed that when even a single gas molecule attaches itself to a graphene surface, this adds or removes electrons which results in a significant change in electrical conductance. Tested with NO2, this result illustrates that graphene sensors are, in principle, as sensitive as a gas sensor ever can be. Since then, unsurprisingly, interest in graphene-based gas sensors has blossomed and only a small selection of the growing body of research activities is considered here.

Researchers at University of Pennsylvania fabricated graphene transistors by using exfoliated graphite on silicon substrates with a 300 nm-thick oxide layer. Devices were functionalised with a self-assembled, 0.5-nm thick layer of single-strand DNA (ssDNA) (Figure 3). Two different ssDNA sequences were selected because of their prior use in vapour sensors based on electronic and optical readout techniques. The devices were exposed to ppm vapour concentrations of propionic acid, dimethylmethylphosphonate, methanol and three homologous aldehydes with the formula CH3(CH2)NCHO, where N=5, 6 and 7. The sensors responded to all of these compounds and showed significantly different current responses (ΔI/I0) for the aldehyde sequence, illustrating a chemical differentiation in a gas sensor not often seen outside of biological systems. For octanol, nonanol and decanol concentrations of 14, 0.6 and 1.7 ppm, the ΔI/I0 figures were 3, 8 and 4 per cent, respectively. Applications in electronic noses are anticipated. In 2009, a group from UCLA reported the fabrication of single-layer graphene films on interdigitated electrode arrays which showed a response to NO2, NH3 and 2,4-dinitrotoluene and in 2010, UCLA researchers and colleagues from Australia’s RMIT University and Korea’s Sejong University used a graphene/polyaniline nanocomposite to detect low concentrations of hydrogen. Another collaboration between UCLA and RMIT involves a graphene film deposited on a lithium tantalate surface acoustic wave (SAW) sensor. The SAW showed a 5.8-kHz frequency shift when exposed to 1 per cent hydrogen. Work at the Chinese Lanzhou University is investigating the gas-sensing properties of defective graphene (one atom missing from each cell) and graphene doped with boron and nitrogen. This has shown that these materials each show differing responses to CO, NO, NO2 and NH3 and may allow the production of highly sensitive and selective sensors for these gases. Selectivity to NO2 in the presence of CO2, H2O, NH3 and O2 has been demonstrated by a group from the University of South Carolina who fabricated a sensor from epitaxially grown graphene on a SiC substrate. Exposure to 500 ppb NO2 reduced the sensor’s conductivity by 2.25 per cent while the above gases increased the conductivity by up to 2 per cent.

The chemical sensing research community has been quick to investigate all manner of nanomaterials and there is a growing body of work involving graphene. Much is aimed at detecting clinical and environmental analytes and in many cases graphene is used to modify an ion-selective electrode. An example of this approach is research at the Pacific Northwest National Laboratory (PNNL). Here, the surfaces of glassy carbon electrodes have been modified with graphene with the aim of detecting paracetamol. Using cyclic voltammetry and square-wave voltammetry, it has been shown that a quasi-reversible redox process occurs at the electrode, yielding a limit of detection for paracetamol of 3.2×10−8 M. Other research at PNNL involves an immunosensor for detecting the cancer biomarker alpha-fetoprotein (AFP) which is based on the dual signal amplification effect arising from the use of graphene films and multi-enzyme functionalised carbon nanospheres. This sensor could detect AFP levels down to 0.02 ng ml−1, with a linear calibration range from 0.05 to 6 ng ml−1. Researchers at the Central China Normal University have developed a sensitive sensor for detecting mercury in water. This uses a nanocomposite film, produced by distributing mono-dispersed gold nanoparticles onto a graphene matrix. Using a stripping voltammetric technique, the sensor showed a remarkably low detection limit of 6 ppt and it was found that interference from other metal ions such as Cu2+, Cr3+, Co2+, Fe3+and Zn2+, often associated with mercury analysis, could be effectively inhibited. The sensor was evaluated by detecting mercury in river water samples, suggesting strong potential for environmental monitoring applications. Another Chinese group, from Jilin University, has demonstrated an electrode based on a nanocomposite of graphene and Prussian blue which exhibited a strong response to hydrogen peroxide (H2O2). With an applied potential of −0.05 V, the sensor shows a linear response to H2O2 over the concentration range 0.02-0.2 mM, with a sensitivity of 196.6 μA mm−1 cm−2 and a detection limit of 1.9 μm. Applications are anticipated in amperometric biosensors. Workers at the National University of Singapore are developing a graphene pH sensor. Based on a solution-gate FET fabricated on an epitaxially grown layer of graphene, the sensor’s conductivity versus gate potential curve exhibits a V-shaped ambipolar transfer characteristic. The shift of the negative gate potential with pH showed a supra-Nernstian response of 99 mV/pH.

Graphane was first reported in 2009 by the same Manchester group that produced graphene and is an insulating 2D compound of carbon and hydrogen with the formula (CH)n where n is a large number (Figure 4). Graphane’s carbon bonds are in sp3 configuration, as opposed to graphene’s sp2, thus graphane is a 2D analogue of cubic diamond. In 2010, a group from Rice University discovered that the strategic extraction of hydrogen atoms from a sheet of graphane naturally opens up spaces that look, and act, like quantum dots (QDs) (Figure 5). As discussed in a previous issue of this journal, QDs offer all manner of interesting sensing possibilities and according to the researchers, along with optical applications, the QDs may be useful in single-molecule sensing and could lead to minute transistors or semiconductor lasers.

Perhaps most importantly, however, is that the discovery of graphane opens up the possibility of making further chemical modifications to graphene. Chemical modification, with graphane as its first example, suggests a whole new field of research. Being able to control a material’s resistivity, optical transmittance and work function would be vitally important for novel photonic and electronic devices such as sensors and nanoelectronics, as well as solar cells and liquid crystal displays. It is clearly early days but when one considers the body of work on graphene, it is only a matter of time before we see the first graphane sensors.