A team of 14 researchers from the University of Michigan is teaming with researchers from five private firms in a project funded at US $19 million to make bridges smarter. The goal is to provide monitoring of a number of different safety-related conditions that might signal bridge weakness. Traditionally, bridge inspection has consisted of teams of humans climbing over the structure looking for signs of deterioration. The task is both dangerous and subject to individual human assessment and not scientific.

The sensors are planned to monitor conditions such as cracks, corrosion and other signs of weakness. It is also envisioned that the sensors will also enable researchers to measure the effects of heavy trucks on the bridges, which is not currently possible.

The impetus for the project was the major, 580 m long, freeway bridge that collapsed in Minneapolis, Minnesota in 2007. That disaster cost 45 lives and injured 145 others. Bridge replacement took 12 months and cost US $234 million. An estimated 140,000 vehicles that used the bridge everyday had to be detoured.

Four types of sensors are planned to replace what has traditionally been a visual inspection technology (Figure 1). One will measure weakness in the concrete. Another will assess cracks and corrosion. Strain and vibration changes will be monitored by a third type. Last will be a test vehicle, which can determine the effects of a heavy vehicle traversing a bridge, something not possible currently. 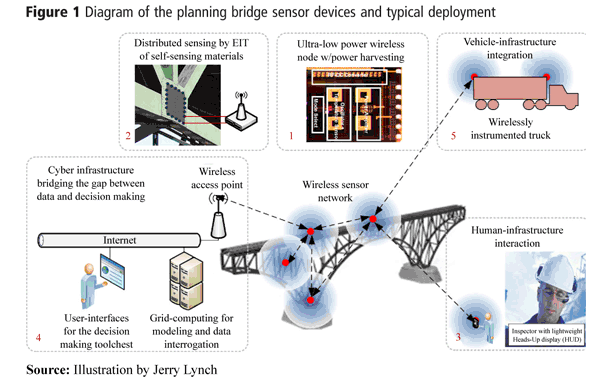 Professor Victor Li has developed a high-performance fibre-reinforce, bendable concrete. It is more durable than traditional concrete and also conducts electrical current. A sensor is planned which will measure the changes in the conductivity of this special concrete and signal weakness in the material.

Professor Jerry Lynch and his team are developing a nanotube-based “sensing skin” which can be glued or painted on to “hot spots” to watch for cracks or corrosion that might be invisible to the human eye. Electrodes, which circle the “skin patch”, would detect changes in the current flowing over the skin.

Wireless sensors, harvesting energy from bridge vibrations or from radio waves in the air, would evaluate strain and changes in vibration of the bridge structure. Another team of Professors in the Department of Electrical Engineering and Computer Science at the University is developing them.

All of the sensors, including the instrumented vehicle, will be able to wirelessly communicate with an access port at the bridge site. In turn, the port can then connect via the internet to transmit data to remote monitoring sites. Thus, the bridge condition information would be available in real time to highway departments responsible for bridge maintenance as well as researchers studying how to improve bridge design, construction and safety.

One of the project goals is to greatly accelerate the field of structural health monitoring of bridges and other infrastructures. One of the project funders, Michigan Department of Transportation, plans to immediate deploy the technology to transform their bridge inspection process. As part of the MDOT support, they are providing the project team with unfettered access to bridges in the State of Michigan to function as test sites for the technology.