Research by an American university group is set to yield a new generation of “smart” vehicle tyres which will detect defects and failures in real time. Manufacturers already make tyres that can warn drivers when the pressure is too low, but researchers at Purdue University in West Lafayette, Indiana, have found a way to make the whole tyre into a type of sensor.

Led by Gary W. Krutz, a Professor of Agricultural and Biological Engineering and Director of Purdue’s Electrohydraulic Centre, the research group believes that these tyres should enhance vehicle safety by continuously monitoring condition and checking for external damage. The system has the potential to detect problems such as cuts, imbalance, degradation and improper mounting, in addition to alerting the driver to punctures and low or unbalanced pressures. In addition, manufacturing defects can be detected. This can be a serious problem, as in 2004, more than 14 million tyres were recalled due to tread separation, according to the US Bureau of Transportation Statistics. Krutz stated “Some tyre damage is not easily detected or prevented, even with proper maintenance and inspection. Occasionally failures occur because of gap damage within the tread and this is a particular hazard on all steel-belted tyres. Tyre damage on the road creates situations that are inconvenient and, more importantly, hazardous for drivers.” An added bonus is that drivers can get their tyres repaired before the condition has degraded to a point of where it needs to be replaced. Krutz’s team had previously developed a hydraulic hose that would warn of failure and was working on the technology for use in orthopaedic devices to detect wear and tear on artificial hips and knees. This led to the idea of applying it to rubber tyres.

Full details of the technology are yet to be disclosed as the group is in the process of applying for US and European patents. However, the principle is to use different layers of conductive and other (e.g. dielectric) materials within the tyre in a sandwich structure which can act as a variable capacitor or resistor. When a distortion arises from a permanent or transitory physical stimulus, the structure exhibits a change in its electrical characteristics of between 10 and 1,000 times, in less than 1 ms. Data are then processed and transmitted wirelessly to the driver. Signal processing circuitry has also been developed which allows the system to predict the remaining safe life of the tyre. Various other system configurations are described in US Patent Application US 2007/0131035 A1.

So far, the group has constructed and tested 24 tyres (Figure 2) and Krutz anticipates that the first use would most likely be in race cars where the cost of a blow-out is high. He believes the technology would cost manufacturers about $1 per tyre, translating into something like $50 for consumers. The technology works for all rubber tyres, such as those used on passenger cars, trucks, construction equipment, garden machinery, mining vehicles and even airplanes. It can also be used on other rubber products such as vehicle isolators, door and automotive seals and orthopaedic devices, as well as on most polymers, such as airplane wing composites, boat hulls and sporting goods, which may lead to a whole new generation of smart, self-sensing materials and structures. Krutz stated “We’ve tested this technology on more than 100 different products from shoes to accumulators.” The technology is presently being developed through the Purdue Research Foundation Office of Technology Commercialisation and the plan is to licence it to tyre manufacturers. 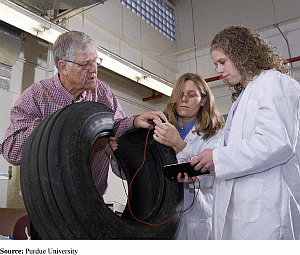