Corus Northern Engineering Services (CNES) has supplied 40 of its Redeem® handheld radiation detection systems (Figure 1) to the UK’s Food Standards Agency (FSA), for monitoring radioactivity levels in sheep in Cumbria, Scotland and North Wales, which were contaminated as a result of the Chernobyl nuclear accident. 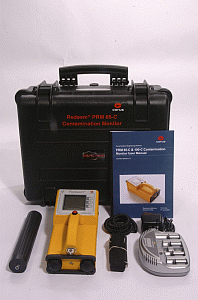 Redeem®, a system for detecting radioactive isotopes, was originally developed back in the 1980s by the research and development laboratories at Corus (then British Steel) in order to prevent contaminated recycled metal from being delivered to its own steel production sites. However, the system has been re-developed, refined and improved over the last 20 years, resulting in a wide variety of new applications outside of its original intended use. CNES is now responsible within Corus for selling and supporting Redeem®.

The FSA is responsible for food safety throughout the UK. Following the Chernobyl accident in 1986, radiocaesium was deposited over parts of the UK, in particular, relatively higher levels fell on upland areas of Cumbria, North Wales and parts of Scotland. The soil in these areas is predominantly peat-based, with high organic and low mineral content, that is unable to bind the caesium and so making it available for uptake by herbage.

Since Chernobyl, the sheep grazing on these upland areas have been monitored for levels of caesium and there are still restrictions in force today on the movement, sale and slaughter of these sheep. Since its formation in April 2000, the FSA has had responsibility for managing and monitoring the sheep in these affected areas of the UK. In order to measure the radiation levels in sheep, the FSA had been using a handheld monitoring device.

Live monitoring of sheep required the holding of a probe on the rump of a cornered sheep, whilst a count of ten seconds was made. Another person simultaneously had to record the number of radiation counts whilst the ratemeter automatically reset itself. This testing procedure needs repeating three times for each sheep and the whole flock has to be tested. The device has to withstand adverse weather conditions, as testing is often done outside in upland weather conditions. Reliability and ease of use are also important.

Vehicle radiation portal monitoring systems have been in use for many years within the scrap metal industry. These systems are installed so that orphan radiation sources are detected if they become mixed up with scrap metal and can be removed prior to the melting of the scrap.

More recently, radiation portals have become increasingly important within security markets and large numbers of systems are being installed at ports and border crossings. The purpose of these systems is to prevent the illicit trafficking of nuclear and other radioactive materials.

Redeem® is available in two main types of system: fixed and handheld. Permanent portal Redeem® systems provide continuous detection of radioactive materials. The portal monitoring systems are supplied to monitor passing vehicles or pedestrians. Typically, the vehicle systems are installed at points of entry at ports, airports or border crossings. The pedestrian systems are used to monitor people entering or leaving ports, airports or sensitive buildings. One radiation portal monitor is capable of covering a large area access point and can be integrated with other systems for plant-wide or perimeter security. Multiple units can be used at large border crossings combined with containment and lock-down systems to secure an area in the event of detection.

When a large fixed system is impractical, Redeem® is also available as a rugged, easy-to-use handheld device. This is ideal for security screening in confined spaces, in order to pinpoint the source of radiation. Handhelds are also ideal for mobile and ad hoc security requirements. CNES’ PRM 100-C range of γ radiation detectors is both ergonomically designed and easy-to-use.

The handheld devices use scintillation technology. A spectral analysis facility provides extremely high sensitivity for γ radiation. The instrument is therefore ideal for measuring γ-emitting radio-nuclides used in the industrial and nuclear industries around the world. The unit has a large graphical display with an illuminated background, so that scanning results can be seen clearly, even in poorly lit environments.

The device has on-board memory to store measured results, which can then be downloaded to a PC, host computer or printer. Modes of operation include spectrum analysis and total counts.

Customs, police and fire departments can carry out security screening using the device. The recycling and environmental sector can use the device to identify unknown sources of radioactivity.

“The system developed used crystal scintillators and was around 60 per cent sensitive, whereas the existing detectors other companies were using operated at around 20 per cent sensitivity. When gamma radiation gets inside scrap metal, it gets attenuated so the signal is weaker. Having detectors at the side of vehicles is not enough. So, Corus placed detectors at the sides, top and bottom of the vehicle, all around the load, in order to improve the overall sensitivity of the system and provide us with a fuller energy spectrum,” explains Crust. “This also means that Redeem can identify the type of radioactive isotope, by reading the precise energy levels present in the scrap metal.”

For more information on Redeem or other CNES products and services, visit the web site at: www.corusnes.com or contact the Sales Department on Tel.: 01642 498041 or e-mail: david.scatchard@corusgroup.com