NASA’s MESSENGER spacecraft has captured images of Mercury during its first flyby of the planet using e2v imaging sensors (Figure 1). As only the second spacecraft to visit the planet after the Mariner 10 mission in 1975, the cameras on board collected more than 1,200 images, including never before seen images of the planet’s surface. 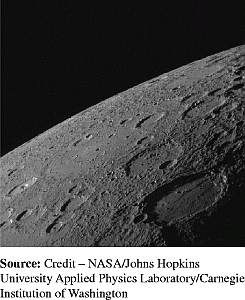 e2v supplied the charge coupled device (CCD) image sensors used in MESSENGER’s Mercury Dual Imaging System, which comprises a multispectral wide-angle camera and a monochrome narrow-angle camera. The cameras mapped the rugged landforms and spectral variations on Mercury’s surface in monochrome, colour and stereo. The detectors in the instrument are CCD TH7888A manufactured in the company’s Grenoble facility, a 1,024 × 1,024 pixel frame transfer sensor, allowing up to 30 images per second, with antiblooming functionality and a possibility of 2 × 2 binning operation.

Launched in August 2004, NASA’s MESSENGER – designed, built and operated by the Johns Hopkins University Applied Physics Laboratory in Laurel, Maryland, USA – will conduct the first orbital study of the planet Mercury, the smallest, densest and least explored of the planets. Learning about Mercury is crucial for scientists to understand more about the planets in our solar system and how they have formed and evolved. The spacecraft has two further flybys, in October 2008 and September 2009, before it enters Mercury’s orbit in March 2011.