SICK (UK) Ltd announces the IVC- 3D 30, a new precision-application version of what is still the World's only 3D smart camera (Figure 5). Specifically, designed to measure, locate, inspect and identify small and miniature parts or defects, the IVC-3D 30 is a powerful addition to the company's industry-leading range of three-dimensional imaging technology. 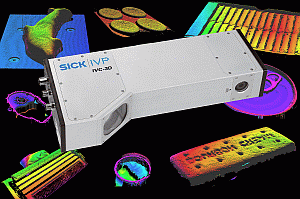 Aimed at end-users and system integrators, currently residing in a 2D world, the device will bring a whole new third dimension to vision applications across a great many industries. Unlike conventional 2D image processing systems, the IVC-3D 30 is capable of detecting geometrical features regardless of their colour or surface finish, using laser triangulation. As laser and optics are integrated in the housing no adjustments are necessary, resulting in stable geometry between the laser line and the camera, which remains uniform throughout the entire inspection process.

Within its 75mm laser line width, the IVC-3D 30 is able to offers height accuracy down to 0.015mm. This accuracy, thanks to a combination of a new lens with a new thinner laser, means the IVC-3D 30 is capable of spotting much smaller defects and tracking much smaller objects. Indeed, applications where height is an important variable, such as electronics manufacture, assembly and test, will see immediate benefits relating to product quality, part visibility and lower reject rates.

Marrying the flexibility of a smart camera with high-speed 3D image capture and processing, the IVC-3D 30 combines up to 5,000 profile sections to form a real 3D image. The generation of a realistic depiction of target items is even possible at varying conveyor speeds thanks to the ability to attach an incremental encoder.

Increased accuracy does not, however, mean increased complexity. Set up is performed through IVC Studio; a software interface that includes dedicated 3D tools and general-purpose image processing functions. Simple-to-use inspection tools can either be applied to individual profiles or they can be used to build up a very accurate 3D image for further processing. SICK also offers monthly training courses to enable users to get their application up and running as soon as possible.

The addition of a third dimension to inspection, tracking and measurement routines has been a revelation to some companies, enabling them to capture accurately far more information than traditional 2D systems. Indeed, the jump from one to the other could be likened to the jump from black and white television to colour – until you have experienced it, you do not know what you are missing or what you can achieve.