Plasmonics is an emerging branch of photonics concerned with the combination of electronics and plasmon-based optics and involves the interaction of light with dielectrics and metals at the nanoscale. All photonic components need metallic contact layers which give rise to plasmon effects when light is involved. Although such effects have usually been regarded as unwanted, causing electronic damping effects and radiation losses, recent research has shown that by suitable engineering and understanding the physical sources for such phenomena, plasmonic effects have the potential to enhance photonic components. Most such components, from LEDs to image sensors, are limited in their size and performance by the diffraction limit, as in principle, light cannot be channelled efficiently through spaces smaller than this limit. However, plasmonics can overcome this and in so doing, has the potential to revolutionise many fields of photonics. Reflecting its importance to the future of Europe's photonics industry, a European consortium, led by the Swiss Centre for Electronics and Microtechnology (CSEM, Neuchâtel), has just started work on an EU-funded e2.8 million plasmonics project dubbed PLEAS – plasmon enhanced photonics.

The European research community leads the world in almost every area of plasmon research but little efforts have been made to commercialise the technology. The PLEAS project aims to resolve this and in addition to academic partners from Spain, France, Northern Ireland and Germany, the consortium includes two key players from Europe's photonics industry: Osram Opto Semiconductor, a leader in high performance LED design and manufacture, and Sagem Défense Sécurité a specialist in vision-based security systems.

The specific aim of PLEAS is to investigate ways of applying plasmonics to make more sensitive photosensors and more efficient LEDs. Osram has a particular commercial goal and see this work as a way of achieving higher efficiency LEDs. Metal contacts often cause a shadow that reduces transmission or collection efficiency and the aim is to improve these devices' efficiencies by at least 20 percent, such that a premium- grade LED that is already typically 35 percent efficient can be improved to an efficiency of nearer 50 percent. These LEDs could play a vital role in the next generation of optical gas sensors. A key objective of Sagem is to develop higher sensitivity silicon photodetectors, where a traditional problem has been overcoming noise when detecting low intensity signals. The aim is to improve the signal-to- noise ratio by using a small detector positioned behind a minute hole in a metal plate. For example, by using a 50x50nm detector behind a nanostructured 5x5µm gold plate, one can dramatically reduce the noise whilst maintaining detector efficiency and sensitivity.

Plasmons are photons that are trapped at the surface of metals and localised. Maxwell's equations show that an interface between a dielectric (e.g. silica or glass) and a metal (e.g. gold) can support a surface plasmon (SP). This is a coherent electron oscillation that propagates along the interface, together with an electromagnetic wave. These unique interface waves result from the particular dispersion characteristics (the dependence of dielectric constant on frequency) of metals. What distinguishes SPs from “normal” photons is that they have a much smaller wavelength at the same frequency. For example, a He:Ne laser, whose free-space emission wavelength is at 633nm, can excite a SP at a Si/Ag interface with a wavelength of only 70nm (Figure 1). 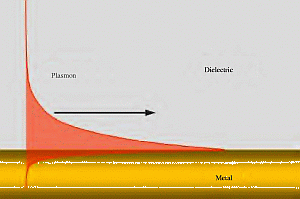 Figure 1 shows the electric field of light guided at a metal-dielectric interface. It shows a SP confined to the surface of the metal, penetrating to a depth of only one tenth of the wavelength which allows it to pass through a hole smaller than the wavelength itself.