A multi-role naval and military aircraft being developed by British Aerospace Systems has entered the critical pre- delivery development stage, with around-the-clock testing of many of its systems.

To help reduce the non-productive workload, a test rig based around a radio frequency torque transducer has allowed the engineers do away with fiddly, fragile and time consuming slip rings because physical contact between the test piece and the transducer is not required.

In 2009 the new Nimrod MRA4 (Figure 4) will replace the Nimrod MR2 which has provided sterling service as the workhorse of the Royal Navy and other military bodies since 1960s. The MR4A is a maritime reconnaissance and attack aircraft that can be configured for multiple roles, including anti-submarine warfare, anti- surface unit warfare and search and rescue. 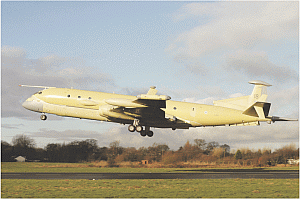 It made its first test flight in 2005. Endurance and integration testing of the aircraft's mechanical systems is now underway, with the torque test rig playing a key role. The rig is built around a reclaimed Nimrod MR2 fuselage, complete with operational landing gear, hydraulic system (including engine-driven pumps), primary and secondary flight controls. Flight forces are simulated by a sophisticated electro-mechanical system attached to the moving elements of the aircraft.

Test data are gathered through a variety of sensors, which have to have as little effect on the system under test as possible. Torqsense, being non-contact, causes no drag whatsoever, so there is not even a need to allow for a constant offset when analysing the data.

Torqsense is used in conjunction with two tiny ceramic piezoelectric combs glued onto the surface of the shaft under test. As the torque increases, the combs open up. This changes their electrical resistance proportionally to the change in frequency of the surface acoustic waves (SAWs) caused by the rotating shaft. In effect the combs are frequency dependent strain gauges that measure changes in resonant frequency of the test shaft as the test programme is run. A wireless radio frequency coupling is used to transfer the data signal to a pick-up head.

The same coupling is used to supply power to the strain gauges, possible because the gauges are based on piezo technology so need less than 1mW of power. This arrangement does away completely with the difficulties of fitting slip rings and maintaining their contact quality throughout an extended test run.

Torqsense embraces all the advantages of SAW technology, including no load imparted to the drive mechanism under investigation, a broader signal bandwidth than other analogue-based technologies and elimination of electromagnetic interference.

In service the Nimrod MRA4 will have a crew of ten and a range of 6,000 nautical miles, which would allow it to cross the Atlantic and return without refueling, to East Asia or South America. It will be powered by four Rolls-Royce BR710 engines, so will have a high level top speed of 600 mile an hour yet be whisper quiet during low level activities. Fuel consumption is such that it can stay aloft for twice as long as its predecessor, a great advance for search and rescue duties.

Described as a technological step change from the MR2, it will bristle with new electronics technology, much of it highly classified.