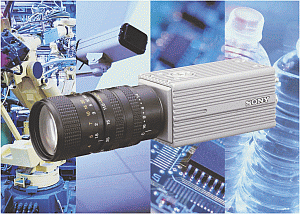 Smart cameras are a fast-growing subdivision of the machine vision market, offering a flexible hardware platform for OEMs, systems integrators and end-users, running under familiar Windows XPe or Linux environments. Unlike conventional machine vision cameras, images captured by the XCI-V3 are processed within the camera, and the processed data is directly transmitted to a PC over a network. This allows fast, cost- effective development and implemention of a range of machine vision applications, using a common hardware infrastructure.

The XCI-V3 provides a direct PC monitor output and USB connector, and an integrated 10Base-T/100Base- TX interface for easy interconnection. It employs a 1/3-type progressive scan CCD and features binning and partial scan functions which can be used to cut the amount of image processing data that needs to be transmitted, or to deliver even higher effective frame rates of up to 300fps.

Users can employ the XCI-V3's built- in real-time 3×3 image pre-processing filter, for instance, to emphasise the edges of object of to change the contrast and hence enhance fine details. To allow the capture of images of fast-moving objects, the camera is equipped with an external trigger input and trigger delay function: a strobe adjustment utility is included to permit accurate timing of an external strobe light.

Software support and ease of programming is a key attraction of the smart camera approach, and Sony provides everything that developers need to build applications quickly and easily. Sample applications can be used to perform basic set-up of the camera's parameters, capture and store images. For more complex applications, a full software development kit is available for both Linux and Windows XPe platforms: this includes an editor, debugger and compiler, supported by comprehensive programming and reference guides.

Third party support is also extensive, under the auspices of the Sony Vision Network. Packages include the Halcon 7.1 library and development tools from MVTech; FDS Research's Imaging Environment; VBAI from National Instruments and Scorpion from Tordivel, which allow quick high-level application development. These tools and drivers allow the use of the XCI-V3 in a range of target markets from automotive, electronics and semiconductor manufacturing, to security, traffic control, medical, food and beverage and scientific applications.

The all-in-one XCI-V3 camera features a compact dust-proof, robust housing being just 55mm (W)×55 (H)×110mm (D). It weighs just 400g, and is specified to industrial standards for shock and vibration. A standard C-mount is used for the lens fixing, and the device can operate over an industrial temperature range of –5-45ºC.