Sony Manufacturing Systems Europe has extended its range of high-speed digital data recorders with the announcement of the SIR3000 series that provide industry leading storage capacity and data transfer rates. The data recorders directly record precious experimental data that must be captured accurately in one take. The units are portable and deliver a high degree of mobility, perfect for collecting data at prototyping or development sites. Sony's SIR3000 series recorders are ideally suited for research and engineering in aerospace, railway, military and engine/turbine industries (Plate 4). 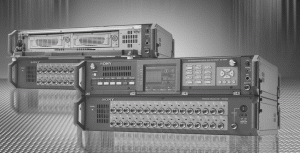 Often tests cannot be reproduced or are prohibitively expensive to reproduce and the customer needs to be 100 per cent sure to have all relevant measurement data after the test. In addition, some tests require a huge amount of data channels and/or high bandwidth and/or need to be run over a long time, simply cannot be handled by a standard computer front-end. The Sony SIR3000 series recorders deliver a high recording capacity of 200GB, high data transfer rate of 12 MB/s, are as easy to operate as a tape recorder and provide a raid one HD array.

“When customers only have one chance to capture data it is critical that they capture it accurately and securely. They can be certain that Sony's latest industry-leading SIR3000 data recorders can be depended on 100 per cent of the time – we have put a lot of effort into ease of use and long term reliability” said, Wolfgang Ziehers, Sales and Marketing Manager for Sony Manufacturing Systems Europe.

The SIR3000 series offer sampling frequencies up to 192 kHz and a dynamic range of 90 dB or more. They offer four times the recording rate and eight times more capacity than Sony's existing SIR1000 models by providing high capacity 200 GB hard disc or AIT3 tape at a transfer rate of 12MB/s. The standard 32 channels can be easily increased to 128 by adding further measuring units.

The SIR3000 series recorders provide a variety of interfaces for real time recording and processing, with an option of input modes including support for voltage and ICP® – and TEDS® – sensors. Typical data captures include the recording of sound, vibration, distortion, biological signals and temperature.

The dual hard disk drives are front mounted in the recorder for easy access, and are hot swappable, protecting valuable data in a raid one array, which consistently captures data without the worry and expense of a drive or media failure. For sensitive data, users need only secure the hard disk drives, and not the entire recorder.