The French company Kloé has launched a unique multi-gas sensor based on integrated optical (IO) technology. Established four years ago, the company was founded by Paul Coudray and Pascal Etienne from the Centre d'Electronique et de Micro- optoélectronique and the Glass Laboratory of the University of Montpellier. Kloé specialises in advanced IO products and technologies and has developed a number of patented manufacturing processes.

Unlike many other techniques for sensing multiple gas species, this sensor does not employ spectroscopy but uses a series of gas-specific interferometers. The sensor comprises a rectangular sol-gel chip that contains a number of laser-written waveguide Mach-Zehnder interferometers, one for each gas to be sensed and a reference for calibration. One arm of each interferometer passes through the chip whilst the other, the active element, is coated with a gas-selective compound that is exposed to the sample. The light is taken to and from the chip with optical fibres. A schematic of the sensor chip is shown in Plate 1. When the target gas is present, absorption of molecules by the active element induces a refractive index change in the active region of the interferometer. The signal propagation velocity in this part of the circuit is therefore changed, which leads to a modification of the interference phenomenon and induces a corresponding change in the output signal's intensity after the waveguides have been recombined. 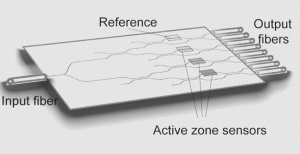 General sensitivity cannot be quantified as it depends both on the characteristics of the individual sensing layers and on the associated detection circuitry. However, it is inherently high, as the gas interacts directly with the active layer which is in intimate contact with the sensing waveguide. This also confers rapid response times. Trials with oxygen yielded a limit of detection in the order of a few μg/l (ppb), suggesting that toxic and combustible gases should be detected readily at well below their occupational exposure limits and lower explosive limits, respectively. 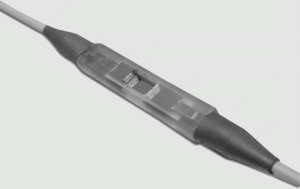 Dubbed the “K-MZS” series, the packaged sensors are about 50 mm long, 10 mm wide and 6 mm deep (Plate 2). Five or six different gases can potentially be detected by altering the individual interferometers' coatings but the present products are limited to either one or three species by models “K-MZS 200” and “K-MZS 400”. To confer sensitivity to oxygen, an active layer based on sol-gel doped with ruthenium is used but this could be replaced with palladium to detect hydrogen, for example. The real beauty of the system is its versatility: users can customise the sensor platform to meet their specific needs simply by depositing compounds that respond to the gases of interest. Several customers are already doing this. Anticipated applications include the measurement of air pollution, food packaging and safety, security, medical diagnostics and process control.