Quantum Research Group, the charge-transfer (QT) capacitive touch company, has unveiled a new technology called QFielde that uses the companys charge-transfer sensing techniques to enable, for the first time, the design of capacitive touch screens with a single conductive layer of indium tin oxide (ITO), rather than the two layers needed for resistive and other capacitive screens (Plate 7). QField technology removes the need for panel openings, seals and bezels because the ITO layer can be printed on the underside of the touch panel surface, which is typically glass or plastic. This unique feature greatly simplifies construction and lowers manufacturing costs. The touch panel can be up to 3 mm thick and the reduction to only one ITO layer makes the screen more transparent, with up to 90 percent light transmission. This means that LCD brightness and contrast is improved, lower level backlighting is needed and less power is consumed – a major benefit and cost saver in portable equipment. The same technology can be applied to flexible or curved surfaces to allow for a variety of screens layouts, enabling designers to differentiate their products through attractive user interfaces. 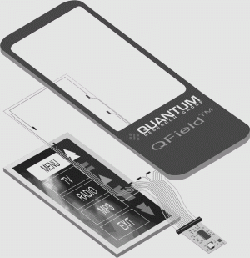 Quantum will be introducing a family of integrated circuits that can be used to implement QField technology and will advise customers with respect to appropriate physical construction of their touch screens and choice of ITO vendors who are familiar with the requirements. Features of the devices will include X-Y coordinate output, 256£256 pixel resolution, gloved hand operation, 20 ms response time and microamp current consumption in low-power mode.

QField touch screens are based on Quantums patented charge-transfer sensing technology that is much more accurate and reliable than traditional capacitive sensing. It involves charging a sense electrode, in this case the ITO layer, then transferring the charge to a detector comprised of a fixed capacitor. The charge transfer acquisition process is carried out in burst mode using microprocessor-controlled switching of MOSFET transistors. The presence of the external capacitance of a finger affects the flow of charge to permit sensing. A spread-spectrum sensing mode is used to reduce RF emissions and susceptibility. It also results in very low power consumption.

Potential applications for the technology are diverse and include consumer electronic products such as mobile phones, personal computers, PDAs and MP3 players. It is equally suited to consumer appliances, industrial applications, and medical systems where easily cleaned, sealed surfaces are often particularly desirable.

QField technology also allows the creation of opaque, arbitrary-position, X-Y reporting, capacitive touch keypads. Applications here include inkjet printer operating panels, A/V remote controls, and similar human-machine interfaces. In this mode of operation the invention allows for an operating panel having arbitrary position reporting similar to that of a laptop track-pad, but much larger and at much lower cost. Designers can implement other control features such as mixtures of capacitive touch buttons, touch wheels, touch sliders, and 2D track-pad surfaces with a single device on a simple, low-cost, single- sided PCB adhered to the back of the plastic or glass panel.

The QField solution for a 4 in. diagonal screen is expected to cost about $3.00 for both the film and the chip. The lack of the need for a bezel and hole in the panel means a significant cost reduction in construction, making the QField approach even less costly to the overall product than resistive, while being infinitely more reliable and clear. The higher clarity of QField means that LCD displays can have backlights with lower power consumption, saving energy and allowing for further cost savings in batteries and circuitry.