New flowmeter technology soon to be commercialised will, for the first time, enable manufacturers to conduct mass flow rate measurements of dry solids within the process in real time as opposed to using conventional off-line weighing systems, members of The Institute of Measurement & Control (InstMC) were told at their 43rd Thomson Lecture held on October 12th at The Royal Society, London.

The speaker, Andrew Hunt, InstMC Vice-President and whose company, Tomoflow Limited, is spear-heading the development, demonstrated how research work based on electrical capacitance tomography had shown that it was now possible to measure in real-time the mass of dry solids – particles, powder, grains or pellets – being transported by pneumatic or gravity conveying through the process pipe without touching the product or disturbing the flow. When commercialised, this would be an industry “first” as mass meters currently in use were confined to measuring liquids and gases (Plate 1). 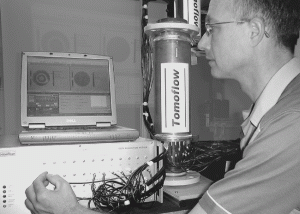 Hunt said that prototypes of a new and revolutionary dry solids mass flowmeter had been successfully tested in university and industrial laboratories in several countries, with response times, resolutions and accuracy in real- time exceeding expectations against conventional weighing systems.

The mass flow rate (the amount of product passing a point in a given time) was, he said, a key process or financial variable but the normal method of evaluating mass was costly and time- consuming, having to separate the product out into a static tank and physically weighing the contents. Furthermore, bulk dry material had to be delivered in expensive bags or whole truckloads and there was little or no control of powder going into a process or vessel.

“The new mass flowmeter technology will open both of these areas to on-line, real time measurement,” Hunt declared. Using the cross-sectional imaging capability of electrical capacitance tomography to combine measurements of concentration and speed, we have been able to develop a measurement of how much product is being conveyed, each measurement being made up to 300 times per second.

“Measuring the mass of moving dry solids in real-time without touching them is now a reality and it will not be long before an industrial mass flowmeter version will be available for wide deployment within the process industries,” said Hunt.

The InstMC's annual Thomson Lecture is named after Nobel Laureate Sir George Thomson who was the first president (1944-1948) of the Society of Instrument Technology, forerunner of The Institute of Measurement & Control.