BCC has published a report that quantifies and forecasts the global markets for nanosensors – sensors based on nanotechnology. According to the report, total global nanosensor sales were estimated at $190 million in 2004 and are expected to rise at an average annual growth rate (AAGR) of 25.5 per cent to reach $592 million by 2009 (Figure 1). In 2003, the nanosensor market mainly consisted of chemical sensors (chiefly ultra-sensitive gas sensors), biosensors and force sensors for use in scanning probe microscopes. Although force sensors are expected to dominate the 2009 market, some of the most dramatic growth is forecast for nano-chemical and nano-biosensors, where the markets will grow significantly through to 2009 at AAGRs of 53.1 and 32.9 per cent, respectively. The report notes that, as many of the properties that sensors measure are formed on the molecular or atomic level, nanotechnology has obvious sensing applications. Sensors constructed at the molecular scale would be extremely sensitive, selective and responsive and thus, the impact of nanotechnology on sensors potentially is huge. The report contains: 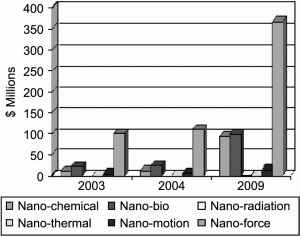