CalVal was developed for the task of periodically re-calibrating or validating sensitive flowmeters embedded in industrial equipment, such as production-line leak detectors, without requiring any intervention from an operator. It consists of a solid-state unit, with no moving parts, which is permanently plumbed-in, either upstream or downstream of the flowmeter to be validated. The gas flow is produced by precise thermal control of the rate of temperature change in a specially designed miniature heat exchanger cell. The required flow is programmed from a PLC or other external controller via an eight-bit DAC input. The PLC also controls how often a calibration cycle occurs: for example, once per day, once per shift or even, for high-value or safety-critical parts, every time the flowmeter is used. This helps to provide a rigorous manufacturing audit trail (Figure 1). 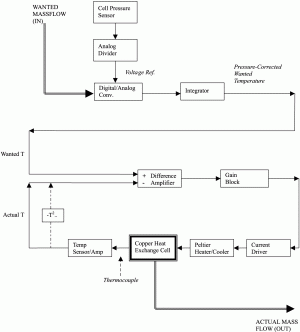 CalVal is intended particularly for checking mass-flowmeters. An important feature is built-in pressure-correction, so that the mass flow of gas produced remains constant – and linear with the DAC input value – over a pressure range from 1 bar (atmospheric pressure) to at least 6 bar (72psig approximately). This feature also eliminates the effect of barometric changes.

The development of CalVal required the solution of several challenging design problems. First, finite element techniques were used to optimise the thermal design of the miniature copper heat exchange cell which had to produce the fastest possible heat exchange from the Peltier heat sources into the air inside. Multiple internal fins ensure that no part of the gas inside the cell is more than 0.25 mm from a copper surface. The cell must have as little thermal mass (heat-capacity) as possible, yet also withstand maximum operating pressure (6-8 bar). Next, the high-gain feedback loop had to be specially compensated, to remain unconditionally stable whilst including the unusual heat-transfer function of the Peltier devices, heat sinks, copper structure of the cell, and the gas inside. In the current design, heat transfer from the Peltier device to the gas in the cell takes little over 0.1 s, which allows the overall feedback loop to settle to a stable flow value within about 1.5 s of receiving a calibration command. Finally, all the electronics functions were designed onto a single six-layer printed circuit board using SMD extensively, to make CalVal’s size roughly comparable with the flow meter it is checking.

Referring to the simplified block diagram in Figure 1 the heat exchange cell (bottom centre) produces a mass-flow outputF = – V0 * d(T0 / T ) dt * P0where T0 is the rest temperature, T is the current temperature, P0 is the pressure of the gas in the cell, and V0 is its fixed internal volume. (The linear increase with P0 simply reflects the increasing gas density as the external test pressure increases – within a calibration cycle, the change in density is negligible.)

The wanted massflow is set-up at the input to the eight-bit DAC (top left). Current pressure in the cell is derived from a precision pressure sensor (top). The sign of the DAC reference voltage is made −ve or +ve for outflow or inflow, respectively, by link settings on the PCB. Its magnitude is forced to vary inversely with gas pressure so as to achieve correct pressure compensation, i.e. to make F independent of P0. The time-profile of “wanted” cell temperature to achieve a steady value of F during calibration is derived from an integrator (right).

The difference amplifier (centre) continuously compares this wanted temperature with the actual temperature derived from a thermocouple integrated into the surface of the heat exchange cell, which is input to an ultra-low noise amplifier. The overall high-gain feedback loop forces minimal error between actual and wanted temperatures, by driving current through the Peltier devices in the correct direction to heat or cool the cell. Significant loop gain is maintained up to 10 Hz: this eliminates any dependence of the output flow on changes in Peltier characteristics, current driver, heat sink temperature, etc.

Since the temperature excursion in T (Kelvin) is significant in relation to the rest temperature T0, a −T2 term is also included in the loop to provide a first-order approximation to division by T.

The arrangement above produces a steady outward (or inward) massflow of gas from the cell for the programmed period – typically, from 2 to 10 s, This comprises the calibration pulse, during which the flowmeter under test will be sampled. At the end of this pulse, the wanted temperature returns to zero instantly: the loop is allowed to saturate forcing the cell temperature back to its resting value T0 – typically 45°C (318 K) – and the flow back to zero again. If the programmed period is set too long for a particular flow value, the Peltier current driver is disabled and an over-temperature flag is returned to the external PLC. Note that CalVal cannot produce a continuous output flow since the cell temperature rise is restricted to 10 K or so: this makes it ideal for automatic flow validation by a PLC or other master controller, but not as convenient for manual validation by an operator.

The CalVal units built so far have exceeded first expectations both in accuracy and speed of the calibration mass-flow pulse – the latter being important because seconds spent in checking calibration are seconds lost to production testing. They have been designed for a maximum output mass-flow of 1.75sccm at 1 bar although higher flows are possible at increased test pressure. Under ideal conditions (pure dry gas, constant temperature, air-conditioned ambient) a flow accuracy of 0.1 per cent is achievable. Under industrial plant conditions (shop compressed air, factory ambient conditions, noise and dirt) the flow accuracy is still better than 1 per cent.

Patent protection of all key features has been applied for.