An easy to integrate revolutionary camera module opens up new applications — Taking camera technology to a new level, Sony Europe Image Sensing Solutions' panoramic camera module allows full circle, 360° images to be viewed in real time, with no moving parts. This allows users to constantly view a full, live and undistorted panoramic image, which until now was obtained by combining or “stitching” shots to form the panorama a 360° panoramic image from multiple cameras or by taking multiple shots while rotating a camera slowly. The compact Sony panoramic devices can be combined with a variety of different products to create new and earlier unattainable functions and applications (Plate 1).

Sony Image Sensing Solutions is releasing the RPU-C251 panoramic camera as an OEM module aimed at value added manufacturers and integrators. The RPU-C251 uses a 360° full-circle lens (see editor's note) with a 1.3M-pixel, 7.5 fps CCD to output a ring-shaped image as a composite video signal. Proprietary Sony DSP technology ensures that the doughnut image is reformed as a perfect panoramic view. 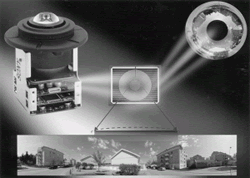 Sony product manager for Image Sensing Solutions, Julien Dalle explains, “Sony Europe has undertaken a research study of European vision system integrators who have indicated that the best-in-class functionality and innovative 360°-view technology of the new RPU cameras will enable manufacturers to produce revolutionary vision systems. These panoramic camera modules are easy to integrate and offer new opportunities to system integrators through their combination of compactness, features and competitive price. In fact we are encouraging integrators and value added resellers to be highly innovative with this product”.

The mechanism that allows the full-circle 360° lens to see all of its surroundings is unique and revolutionary. On this innovative Panoramic Annular Lens (PAL), the image of all the surroundings is reflected twice on two reflective surfaces (formed by vapour deposition of aluminium), one in the lower part of the lens and the other at the top with the image being formed in a ring shape on the CCD. This allows everything around the lens to be imaged within a range consisting of 38° above the plane of the lens and 17° below for the desktop mount model (RPU-C251), or from 0 to 66° for the ceiling mount model (RPU-C352). This angle was set by design of the lens.

The use of a full-circle 360° lens means that the whole surrounding area can be imaged with a single lens – in fact the area below the plane of the lens is also imaged. This provides advantages over traditional surveillance systems as the user can view 100 per cent of the image all the time without having to decide where to point the unit at a certain point in time. Additionally, the lens design results in a depth of field (the range of distances in which objects are in focus) of from zero to infinity – focusing is not required.

There are no moving structural parts. Thus pan, tilt, and zoom operations can all be implemented in software. This dramatically reduces maintenance, and keeps power consumption to a minimum, further reducing the total cost of ownership. Images can be formed as long as just the lens section is exposed, so for safety and security the camera module itself can be embedded in a wall or ceiling.

In their raw form, the images produced by the full-circle 360° camera look odd when viewed directly, so they have to be converted to a more pleasing and discernable panorama. There are two ways to implement this panorama expansion process; in software or in hardware. The software- based approach requires a dedicated PC to capture the ring shaped image and convert it by software. This approach is very expensive and not usable in restricted space applications. On the other hand, the Sony hardware approach uses a dedicated converter board to process the image to a panorama format. It also provides a range of variation in terms of output format, pan, tilt and zoom.

The RPU-C251 includes such a converter board to supply a standard PAL, NTSC or VGA video output from the ring shaped image captured by the CCD, in a standalone compact size. The ability to provide both PAL and NTSC in one single product vision camera is rare, although very useful, as companies who are selling worldwide only have to manage one single product model. Sony is developing a hardware solution that provides digital interface for use with networks and other information equipment.

The list of applications for the new modules is wide. Particularly, the units offer great benefits to users in CCTV and surveillance, and other novel applications in areas such as video conferencing and webcasting – i.e. viewing a number of people around a table in a single view. The Image Sensing Solutions division of Sony Europe has traditionally been working with integrators and value added resellers and the support for the RPU modules is no exception. The RPU-C251 (desktop model) and RPU-C352 (ceiling model) are available currently from Sony.