HBM has won a $2.7 million order for its MGCplus and catman data acquisition and analysis equipment to monitor the loads affecting the space shuttle during its preparation and launch sequence (Plate 1).

United Space Alliance (USA), the prime contractor for NASA's Space Shuttle Program, placed the order as part of the continuing drive to improve safety in the run-up to the next shuttle launch later this year. HBM's equipment is a key part of the shuttle's critical data acquisition system for monitoring the loads during ground operations. 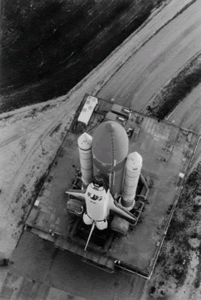 The equipment will be fitted on the mobile launch platform (MLP) and connected to each of the eight tie-down points securing the space shuttle in place. NASA needs to monitor the loads to ensure that the weight is equally distributed across the tie-down points. Monitoring is needed during the complete process from the initial stacking and assembly of the space shuttle to its rollout to the launch pad and final launch at the Kennedy Space Center in Florida.

The operation is critical to the space shuttle's safety as the loads at the tie-down points vary, especially while inserting the payload and filling the tanks with liquid propellant. The loads on the tie-down points must be kept within acceptable limits while the space shuttle remains on the ground to avoid adversely affecting operational performance.

HBM's equipment was chosen because it was the only supplier offering a 24-bit analog to digital converter. This ensures very high data resolution giving excellent measurement precision, accuracy and stability helping USA to overcome a major technical challenge in measuring the loads at the tie-down points.

Another reason for choosing HBM was the long-term stability of the data. This is important because the data are gathered in snapshots during the early stacking stages as shuttle segments are added to the assembly and the load changes calculated by comparing the different snapshots. These snapshots are frequently some 4 h apart and, occasionally, can be separated by 24 h. Any variations in the data stability could adversely affect the load calculations.

Because the equipment is a critical system it has to meet stringent criteria including a high level of data redundancy and no single point failures ensuring it provides accurate information throughout a shuttle launch.

A key advantage of HBM's equipment is the use of carrier frequency excitation since it gives the equipment an inherent immunity to external noise and excellent long-term stability.

The equipment will gather data independently from a wide range of sensors. The MGCplus data acquisition hardware features an A/D converter for every channel ensuring synchronous measurement, and all data will be time-correlated using HBM's specially developed IRIG-B interface.

All of the HBM equipment will be supplied as standard modules capable of withstanding the high temperatures, shock and vibration associated with the launch of the space shuttle. The system includes a high degree of redundancy and features HBM's internal compact flash memory allowing data to be gathered at the same time as it is being transferred in real time to the LCC.