Non-destructive testing (NDT) plays a vital role in ensuring the integrity and safety of all manner of material and components. Methods such as radiography, dye penetrant testing, ultrasonics and eddy current are all well established and are used throughout the power generation, petrochemicals, aerospace and automotive industries to detect cracks, poor welds, porosity and other defects. Crack detection, in particular, is used extensively on critical components and structures such as pressure vessels, nuclear power plant and aircraft and vehicle parts, both during manufacture and whilst in-service. The most widely used method, dye penetrant testing, is inexpensive and versatile and relies on highlighting surface cracks by subjecting components to highly penetrating coloured or fluorescent dyes. However, it is slow and difficult to automate and in some cases it cannot be used, as some surfaces require non-invasive testing, some are unsafe to humans (e.g. on nuclear pressure vessels), and others exhibit high surface roughness which can lead to the risk of false readings.

With these limitations in mind, CEDIP Infrared Systems, a French specialist in thermal imaging equipment, is collaborating with Framatome ANP, the French nuclear power plant manufacturer, who has patented a unique thermal crack detection technique. Termed the Flying Spot method, this is a variant of conventional thermal NDT and relies on illuminating and scanning the target with light from a Nd:YAG or CO2 laser. This causes localised heating and raises the surface temperature by around 5°C. The resultant three-dimensional thermal diffusion in the target is sensitive to discontinuities perpendicular to the surface so any defects such as cracks will impede the heat flow. An IR camera scans the surface and is synchronised with the laser. The IR emissions are detected by the camera which generates an image of the heat distribution in the target and highlights any surface discontinuities. A system schematic is shown in Plate 6. 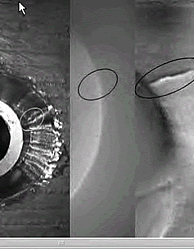 The technique has already demonstrated the ability to detect surface-breaking cracks with depths of less than 1 mm and widths of only a few microns. Plate 7 shows three images of a 12 mm- long crack in a metal component. On the left is a visible light image, where the crack is all but invisible; in the centre image the crack has been subjected to fluorescent dye penetrant inspection and is just visible; and the image on the right was taken by the new thermal method, which shows the crack clearly. 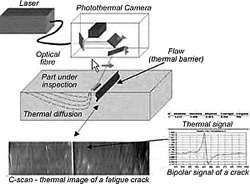 Plate 7 Visible, fluorescent dye and thermal images of a crack in a metal component

The Framatome subsidiary Intercontrole is using the technique to detect cracks in the pressure vessels on nuclear power plant in an attempt to replace dye penetrant techniques. The price of commercial systems is likely to be in the region of 200,000, so in the short-term at least, other applications are likely to be restricted to inspecting highly critical components where other methods are ineffective or cannot be used. A future challenge will be applying the technique to non-metals such as carbon composites and other high performance materials and a key goal for the company in 2004 is to develop system variants to suit other applications such as checking components in aircraft and automobile engines.