Crydom Magnetics had introduced a compact new submersible float switch for use in water, industrial wastewater and sewerage tanks (Plate 4). Offering 33 per cent size reduction over the Crydom's standard FFSMC range, the new LM series float is suitable for installations where space is restricted. 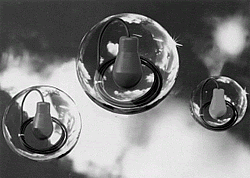 The device, featuring a new rounded cable entry shape to avoid “ragging” in sewer systems is designed to be suspended by the cable in fluids. Pivoting around the cable entry point or supplied counterweight, the device operates a microswitch at 15° from horizontal, giving a close differential between operate and release switching points.

The switching element is rated up to 10A resistive and available in normally open, closed or changeover configuration. Unaffected by humidity and condensation, the LM series can be operated in widely fluctuating temperatures.

Available from Crydom direct or RS Components, the LM series complements a growing range of Crydom submersible float products, many of which have approvals from the water regulations advisory scheme (WRAS).