Cognex, the world's leading supplier of machine vision systems, has introduced PatFlexe™, the newest member of their industry leading PatMax™ family of geometric pattern finding technologies. PatFlex is a revolutionary patent pending software tool that enables a vision system to locate an object, feature, or pattern whose perspective has changed or whose surface is curved, warped, wrinkled or stretched. By finding and then correcting these types of distortions, PatFlex enables the full range of Cognex vision tools to be applied (Plate 8). 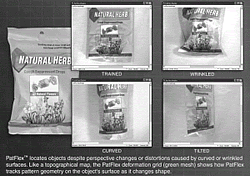 Plate 8 Cognex Platflex is a new software tool that enables a vision system to locate an object, feature, or pattern whose perspective has changed or whose surface is curved, warped, wrinkle or stretched

“When introduced in 1997, PatMax set a new industry standard for locating objects despite changes in appearance from lighting, rotation, or size variations,” said Justin Testa, Senior VP of Marketing for Cognex. “Now, PatFlex takes geometric pattern matching to a new level with unsurpassed resilience to severe perspective changes and spatial distortions. Greater perspective tolerance provides machine design flexibility, allowing cameras to be mounted at an angle to the work piece. PatFlex extends the family of PatMax technology to a whole new set of applications and eases the part fixturing and system set-up burden for our customers. Once again, Cognex raises the bar for geometric pattern matching in the vision industry.”

PatFlex addresses a variety of applications that were earlier impossible, or required complex multi-step vision operations. For example, PatFlex enables the optical verification of characters marked on curved surfaces, where perspective and bow distortions are common. PatFlex tolerates skew and aspect compression of the mark, as well as distortions caused by vibrations in the marking operation. In addition, PatFlex enables the location and inspection of decorative labels on cylindrical surfaces such as cans and bottles, and accounts for surface irregularities that can occur in packaging operations utilising flexible shrink-wrap films.

PatFlex is also suitable for applications where the object changes shape during production, such as in packaging operations employing non-rigid containers like pouches and bags. The increased use of these flexible packaging materials has pushed the limits of machine vision technology because of contour changes and topographical variations in surface patterns that can occur during production, such as when a flat empty beverage pouch expands and distorts when filled. By overcoming these changes in product appearance, PatFlex enables today's most challenging inspection and verification applications.

PatFlex will be released for use with Cognex's PC-based machine vision platforms in Q4 2003, and will be available in both the VisionPro® graphical development environment and the advanced CVL™ (Cognex Vision Library) software developers kit.