The four sensor heads that make up the new LV range from Keyence are breaking industry records because of their accuracy and ease of use. The secret of this new technology lies in the use of a semiconductor as a light source, which ensures sharp beam spots, even at distances of up to 1,000mm (see Plate 10).

First of the new range is the LV-H62, a straight-beam, retro-reflective type sensor. Its built-in polarised reflection optics (PRO) function cancels direct reflection from mirrorsurfaced targets. The polarising filter ensures stable detection, even of metal targets. Another advantage of the LV-1162 is its single-lens structure. A conventional sensor uses a transmitter and a receiver, which leads to variation in the reaction point. In this model the transmitter and receiver are combined, eliminating variation in the reaction point and allowing detection equivalent to thrubeam-type sensors. 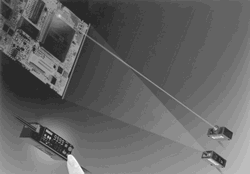 In Fine mode, the LV-H62 detects at distances up to two metres using its PRO. The Turbo mode works to five metres and the Super mode to seven metres. With the smallest detectable object just 0.05mm and a spot diameter of 1.5mm, this model is ideal for detecting the top of overlaid PC boards, protruding pins and wafers, plus small targets.

The second member of the new range is the LV-H137, a small-spot, definite reflective type sensor. Its small beam spot of approximately 50µm diameter, coupled with the amplifier's high-speed response of just 80µs, provides superior performance for the positioning and detection of small objects. With a digital display that makes it easy to set up the sensor for detecting small objects moving at high speed, and a detecting distance of just 70±45mm, this model is ideal for tasks such as counting connector pins, positioning through glass windows, and detecting the chamfer of valve components.

A third model, the LV-H32 is a long-distance, reflective, adjustable-beam spot sensor. Using super mode this model has a detection range of 1,000mm, 30-times greater than any conventional Keyence model the same beam size. With a maximum spot diameter of 0.8mm and a trimmer that locks the lens in a fixed position, the LV-H32 is designed for applications such as checking for part pick-up with a suction head, detection of the presence/absence of a part, simultaneous detection of several components, and detection of broken projection pins.

The last of the new models is the long-distance, reflective area-detection sensor LV-H42. With conventional sensors, the detection area can be out of focus when the sensor is further away from the target, or if the detection area is limited when using a small spot. This is not a problem with the LV-H42 because even when the sensor is a long way from the target, the sensor produces a clear linear spot. This results in reliable detection, even if there is variation in the position and shape of targets. With a maximum detecting distance of 1,000mm in super mode, this model is ideal for detecting the number of workpieces remaining on a parts feeder, the presence or absence of an O-ring, and verification of adhesive application.

The LV range also includes an amplifier that makes use of a digital display to give access to many useful functions, including current value, setting value and sensor operating status. The amplifier also boasts an industry-leading response time of 80µs and 16-bit resolution for accurate and powerful operation.