With a resolution of 0.01 µm and a 2400 per second sample speed, Keyence's new range of high-speed, high-accuracy intelligent micrometers is a breakthrough in optical technology (Plate 6). 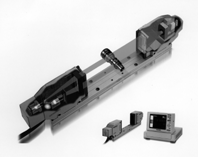 The LS-7000 Series makes use of a new optical system coupled with digital processing to produce industry-leading results. It involves uniform, stable light emitted from a gallium nitride (GAN) LED passing through a telecentric optical system before being received by a high-speed linear CCD (HL~CCD). The signal is then digitally processed for output, which m turn leads to high speed and accuracy of measurement.

At the heart of the new system is the measuring head. Its telecentric optical system uses only parallel light to form an image. This prevents fluctuation m lens magnification due to a change m target position and therefore ensures extremely accurate measurement. The HL-CCD allows continuous exposure to all received light, which in turn enables the extremely fast sampling rate. Another important part of the measuring head is the monitor camera, which incorporates a CMOS image sensor to give users both a realistic image and a small compact size.

In terms of transmission technology, the GaN LED produces a safe, uniform light containing little noise while a special diffusion umt built into the measuring head distributes the light and ensures more uniform exposure of the target.

As a result, the LS-7000 Series has a number of major advantages over conventional laser scan micrometers. These, for example, are often affected by heat and vibration from the motor m the sensor head together with interference from the laser diode. This leads to poor repeatability. With its advanced LED and CCD technologies, the LS-7000 Series achieves twice the repeatability and measurement speed of other rmcrometers. Another advantage is that the HL-CCD takes a continuous average value measurement rather than having the gaps m detection which plague conventional laser scanning techniques. This makes it an ideal tool where moving targets are involved.

The use of advanced technology also reaps rewards in terms of maintenance. Conventional systems can suffer damaged laser diodes as a result of external noise or high temperature. This requires regular maintenance. However, the LS-7000 Series lasts twice as long before any maintenance is needed. In addition, the IP64-rated measuring head stores compensation data to ensure compatibility with the controller. This greatly improves measurement accuracy and head maintainability.

This controller supports numerous applications. For example, one controller can connect two measunng heads. Since this allows simultaneous output from two channels, inspection of outer diameter and eccentricity can be performed at the same time. Simultaneous measurement with two heads is also possible.

Another important function is that the threshold value for binary conversion can be changed according to the purpose of detection. This allows edge detection of a transparent object, an activity which is very difficult with conventional rmcrometers. The threshold level can be easily adjusted by checking the detection status on the controller screen. Other controller functions include a printer connection, comparator outputs, 16 programs, an auto-zero function, power supply stand connection and a mutual interference prevention function.

The standard controller also has an extra large LED that, with a height of 20.3mm, offers the industry's largest characters. Displayed values are displayed clearly, even from a distance and m the dark. In an extra safety feature, the characters on the LED display for tolerance setting are also large 9.9mm - to prevent setting errors.