Gentex Corporation the Zeeland, Michigan- based manufacturer of automatic-dimming rearview mirrors and commercial fire protection products, has developed a cost- effective, high- performance, intelligent light sensor to control the dimming of its rearview mirrors. This proprietary technology is already in production for a new Gentex mirror, and may also be used in future mirror- related Gentex products (Plate 1). 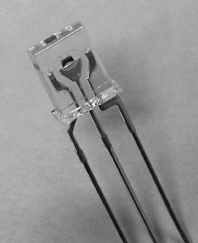 Gentex's Active Light Sensor (ALS) technology consists of a tiny CMOS (complementary metal oxide semiconductor) chip that contains a light-sensing element and the additional electronic circuitry necessary to communicate light levels to a microprocessor. Because the device is similar to a computer chip, it's inexpensive, durable, and easy to manufacture. And, because it's a digital device, it doesn't require external circuitry, such as a signal amplifier or analog to digital converter, allowing Gentex to reduce the complexity of its circuit boards.

The Company has applied for a number of U.S. and foreign patents on the ALS technology and related inventions.

During nighttime driving, a Gentex mirror uses sensors to detect ambient light levels while continually monitoring glare coming from the vehicle headlamps behind you. These sensors communicate to the mirror's microprocessor, which in turn dims the mirror according to the amount of glare detected. The brighter the glare, the darker the mirrors become, protecting the driver's vision and improving driving safety.