Four separate vision systems have been integrated into one fully automated machine that inspects every surface of oil seals for shock absorbers. The machine operates with a cycle time of less than four seconds in order to achieve the through-put common to the supply side of automotive manufacture.

Perfection is the norm in component manufacture for the automotive industry. The parts have to be supplied in huge numbers to precise deadlines, each being ready for installation with no faults or blemishes. As a result, quality checking is a key part of many production operations. It is little wonder, therefore, that this sector pioneered the use of industrial vision systems to automate the inspection process and has always led the way in adopting new developments in the technology.

Sunderland-based machine builder Phasor Ltd has come to specialise in vision technology and has just completed a state-of-the art inspection machine that checks every detail of every surface of shock absorber oil seals. The seals are basically rubber mouldings, and they are checked for scratches, marks and surface blemishes; inclusions; and imperfections such as incomplete mouldings.

"This machine will check literally thousands of seals every day, each getting a thorough going-over", says Peter Hage, Phasor's head of design. "It would have been easy to design and build a machine, had cost and cycle time not been part of the equation but, as they were key criteria, we knew we would have to come up with a radically new solution".

Knowing that Omron Electronics had some innovative low cost vision technology, Hage invited Malcolm Horner of Omron to a brain-storming session in which some concept designs would be developed and explored. "We had used Omron's F150 'vision sensor' in the past and were pleased with the results. This is an order of magnitude cheaper than a full blown vision system, but achieves fantastic results in those many applications where the operating environment is visually stable".

Horner explains the technology behind the F150: "Calling it a sensor is actually an understatement, as the F150 is a development of our already sophisticated pattern matching sensor, the F10, which does in a single unit what used to require a whole array of separate photo sensors. The F150 offers full vision system performance at commodity prices and with commendable simplicity of installation".

Phasor's requirements for high-speed 3D inspection would, until very recently, have required a top-flight vision system, but the brainstorming meeting proved to be a coup for Horner. He asked one simple question: "Can you wait three months?" And when Hage heard what was on offer, the answer was an emphatic: "Yes!"

Horner was proposing the first use in the world of the new F150-3, the third generation enhancement of the F150, which has capabilities comparable with many visions systems that cost ten times as much and which was due for launch in Autumn 2000. Most significant to Phasor is that the F150-3 includes a high performance surface defect algorithm.

Phasor's machine in its final form feeds individual seals along an input conveyor to a pneumatic arm that transfers them one at a time to a rotating spindle, which forms the first of two inspection stations. Here there are three F150-3 cameras, one focused on the main seal lip, one on the main body, and one on the side of the seal. Each camera views a 30deg segment of the seal and the spindle rotates around in discrete steps, so that the whole of the seal is viewed in a series of 12 images

The F150-3 uses pixel-counting techniques to detect imperfections on the seal in each of the 36 different images. Each image analysis is executed in under 110 milliseconds. After this a second pneumatic transfer mechanism inverts the seal on to a further 12-step rotating spindle. Here a single camera searches the underside of the seal for surface blemishes (see Plate 4).

The machine is set so that both spindles are loaded and analysing seals simultaneously, so a cycle time of less than four seconds per seal is achieved. However, this means that 48 different images have to be analysed in under four seconds and, to complicate this already daunting task, images from the two spindles are being generated virtually simultaneously and, therefore, any sequence of 48 images actually refers to two or more seals rather than to a single one. 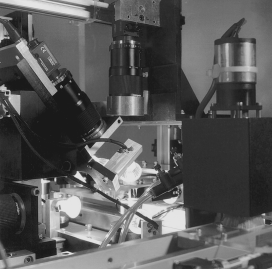 Hage was experiencing some disquiet at the thought of having to program the controlling software for the image analysis so that each seal was associated with the correct 48 images, but Horner was able to put his mind at rest. "Simultaneous with the launch of the F150-3, Omron is publishing some new software called Vision Composer that automatically names images and objects, no matter how complex the situation. It will have saved Phasor hours of programming time and de-bugging".

The four F150-3s are controlled by an Omron CPM1 micro controller and the image analysis data are fed from the cameras to an Omron CQM1 programmable logic controller, which controls the safety switches and conveyor drives (again from Omron) and the pneumatics (which are all SMC). The CQM1 also controls the pneumatically powered reject gate, which flies open to divert any defective seals, as identified by the image analysis, to the recycle bin.