The increased use of electronics products such as mobile phones and pagers has led to an evolution in LCD and LED displays. They are now much smaller but at the same time display much more information. In order to get more information into a smaller area the resolution and density of pixelated displays are increasing. Unfortunately, this has made the process of insuring product quality increasingly difficult for consumer electronics manufacturers.

The main problem is, no matter how small the individual pixels are, manufacturers must ensure that each pixel is functioning properly so information appears correctly on the display. For instance, consider the "0" and "8" characters on a typical cell phone display. What differentiate the two are a few regions of illuminated pixels. So, if a consumer presses the "8" key and sees a "0" on the screen, it may be because faulty pixels went undetected during the manufacturing process.

Display pixels fail for a variety of reasons. Problems range from solder shorts, in which excess solder paste bridges connector leads, to firmware bugs, in which case the software governing display behavior generates the wrong output. Whatever the root cause, to remain competitive, electronics manufacturers need to find these defects long before the customer does, and early enough in the manufacturing process before more value is added to the device being produced.

The traditional approach has been to inspect displays by in-circuit testing, manual inspection or a combination of both. In-circuit testing is conducted during assembly to catch any major faults before more value is added to the product. Typically, a display attached to a printed circuit board is put into a testing station in which an overhead bed of spring-loaded pins touches down on each exposed test pad on the board. Current is applied, turning on the entire set of display pixels at once, indicating general circuit functionality. Unless there are any major faults (i.e. a whole section of the display malfunctioning) the product passes the testing stage and proceeds to assembly.

Manual display takes place at the end of the production cycle, whereby an operator examines the product, turns it on, and determines whether or not the display appears to be working normally, or whether any noticeable defects are present. In some cases a command can be punched into the product's keypad which illuminates display pixels in specific patterns, such as a square or checkerboard, to make pixel faults more visible to the operator.

Both approaches have their limitations. In-circuit testing is used primarily for major fault detection, and does not typically ensure individual pixel integrity. Nor will it detect dependent behavior between individual pixels or segment clusters, which can cause "ghosting", a situation where turning a single pixel or segment on will turn on several others in its proximity.

Final testing by an operator may well spot this fault, but by now a device has been fully assembled and enclosed, and therefore would require costly reworking to fix the problem. This would involve not only a technician's time to reopen and fix the unit, but also new parts and possibly enclosures damaged when re-opening the device.

Manual inspection also suffers from subjectivity. Manufacturing engineers prefer benchmarks to estimates, and specifying acceptance thresholds for contrast, brightness, uniformity can be very difficult. An operator's subjective estimate of these parameters can vary throughout their shift. Even when compared with fixed standards such as a photo of a good product, or a previously passed product, operator opinions will vary. But where manual inspection suffers most is through repetition and boredom. During an eight hour shift operators may well inspect up to 1,500 displays. Even the most conscientious would have difficulty ensuring 100 percent product quality at this pace.

During the past several years, there has been a growing trend towards using machine vision technology for automated, 100 percent display inspection. A typical system will place a video camera above a conveyor to capture images of an LCD (see Plate 2). Whilst under the camera the LCD is electronically controlled to display a series of images which would reveal independent and dependent behavior defects. The images are processed on a PC, which uses a combination of machine vision hardware and software to determine if any defects are present. Contrast, brightness and uniformity can be determined relative to fixed standard. Speed of inspection is typically fractions of a second, while a complex display may take around 1.5 seconds, simple LCD inspections may take 1/100th of a second. 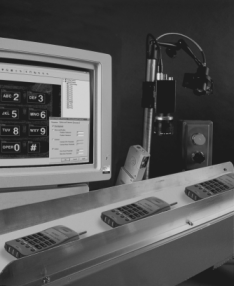 In the past, vision systems used for inspecting LCD and LED displays have been built from general vision components adapted to inspect displays. The quality of results has depended on the amount of R&D that went into the installation. In general implementations have been very display specific. Problems have arisen when the film coating that protects the display wrinkles, polarizes or distorts, or bad material combinations make the lens, protective film, or LCD background reflect or blur the light to illuminate the product. This forces parameters to be selectively opened or tightened to reflect the variation from display to display. Using general purpose vision components, this can be time-consuming, and can intimidate manufacturers who do not have the expertise to tailor their vision systems to accommodate the variety of process variations that can exist. As a result, many manufacturers have shunned away from using vision for automation inspection.

Recently, advancements in both PC and machine vision technology have given way to new vision technologies designed specifically for the peculiar needs of display inspection. For example, a new vision system from Cognex Corporation supplies a variety of display-specific tools that minimize R&D time by wrapping the tool complexities in simple GUI interfaces. One such tool applies a virtual "probe" to each pixel on a display, enabling the system to determine whether the display is good or defective despite inconsistent lighting or creases that have formed in the transparent lens tape. A graphical Windows-based interface allows access to sophisticated features without writing a single line of software.

New machine vision technology can also add a great deal of value to the inspection process by looking for other types of defects. For example, the same vision systems that inspect pixels can be used to measure the alignment of a display within the housing. They can measure the consistency of back-lighting, verify the print quality of keypads, the color of logos, and inspect the product enclosures for scratches.

Perhaps the most important benefit machine vision technology offers is the ability to detect errors early in the manufacturing process. This enables operators to take care of problems on the spot and make modifications to the process before more value is added to a product. The cost savings here can take a variety of forms. Manufacturers estimate that catching a defect on a device at the board level, before final assembly, can save up to 90 minutes of a technician's time per defect in the troubleshooting/repair loop. This includes debugging, disassembling, reassembling, re-testing, process logging and reinsertion of the device on the assembly line. Many small electronics housings were not meant to be reclosed after opening. Therefore, the housings and any other associated parts (e.g. gaskets, rivets, shock pads) become 100 percent scrap.

Return-on-investment for such systems varies greatly as it depends upon so many variables including your parts cost, labor rates, defect rates, manufacturing process, product design and your station implementation. Few manufacturers even attempt to quantify this themselves, as the cost justification is gross enough to be considered empirical. Additionally, a recent push for higher quality electronics makes the alternatives unacceptable. Implementation can be as sparse as: a PC, a display inspection package, a camera, and an electrically driven reject mechanism.

As today's consumer electronics devices continue to increase in functionality and drive greater capability in their displays, more manufacturers are turning to machine vision technology for consistent and reliable inspection. By helping to improve quality and productivity while lowering production costs, the technology is proving essential for highly competitive industries that want to profit within tight margins.