Phoenix ISL, the specialist manufacturer of non-destructive testing equipment, has recently returned from an international symposium in Turkey, at which it demonstrated an effective solution to the serious safety threats posed by earthquake damaged gas pipelines (Plate 1). 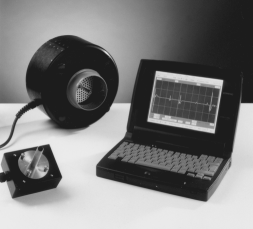 The First International Non-Destructive Testing Symposium and Exhibition took place in Ankara in October 1999 following a series of major earthquakes which caused widespread destruction. As an experienced manufacturer whose inspection systems had previously been used to test pipelines in Japan in the aftermath of the Kobe earthquake, Phoenix was able to provide expert advice about the dangers posed by blocked and damaged gas supplies.

The principal threat occurs when water enters the pipeline through a crack or deformed joint and then pools at the lowest point. This entrapped water can create a sump which effectively blocks the passage of gas. However, because the pressure on both sides of the blockage will initially be equal, gas appliances will light normally and so the problem will not immediately be noticed. As a result, the appliances may then be left to operate unattended.

As the gas is used, the pressure on the consumer's side of the sump will fall quickly and the flame will be extinguished. Then, over time, the gas in the pipeline will bubble slowly through the water, causing it to evaporate until the blockage is eventually cleared. When this occurs, the gas will be able to escape through any appliances still left turned on, thereby creating a serious danger of secondary accidents such as fire, suffocation and explosion.

Phoenix's Acoustic Ranger is an ultrasonic inspection system that provides an easy to use, yet highly reliable method of detecting blockages in pipelines and, thus, of preventing such secondary accidents. Already proven in its applications in Japan, and widely used in other sectors including the nuclear and petrochemical industries, it can inspect up to 0.5 kilometre of pipeline from a single point of access. To gain access, it requires no dismantling of the pipeline since it uses standard break-in points.

The Acoustic Ranger emits a sound wave which runs along the inside of the pipe, following it around bends and spirals. It offers greater accuracy and substantial time savings when compared with conventional testing methods and, unlike manual inspection techniques, it produces a detailed record of all findings which can be stored on computer for future reference.

Considerable interest was shown in the Acoustic Ranger when Phoenix demonstrated it in Ankara, and the company is confident that, in the wake of earthquakes such as those which struck Turkey, it will make an important contribution to improving the safety of both domestic and industrial environments.