A new concept in sensing technology

Thanks to the innovative application of magnetic induction, a brand new sensing concept has recently been introduced to whet the design engineer's appetite. Furthermore, it is not just another niche development, it is universally applicable. It is a concept which is capable of issuing a serious challenge to existing position sensor technology. The originator is the Japanese company Amiteq and through its partner Encoder Technology, a wide range of unique sensors is now available in the UK. The development carries the name Inductcoder and its introduction is the result of sponsorship and support from both the Japanese Government and major names in the engineering industry. Inductcoder is currently enjoying rapid success and has been adopted by many of the world's leading machinery and systems manufacturers.

The Inductcoder range comprises rotary, linear, wire, stroke detection, linear gauge and strain gauge types each with different characteristics and detecting elements to meet various applications. As a measure of Inductcoder's capability, an absolute resolution of 220 - 20 bit - can be achieved with an ultra small rotary Inductcoder sensor of only 10mm in diameter. Such a device is not only extremely rugged but also highly cost effective. Excellent repeatability, high resolution, high accuracy and quick response are the principal characteristics of this non-contact sensor which is proving particularly popular for applications in hostile environments. It is also maintenance-free.

How does it work?

Inductcoder is a digital absolute system which comprises a detecting element - a combination of magnetic coil and ferromagnetic material - and a conversion element. This converts mechanical deviation to the phase difference between the input and output signals and establishes position by measuring time. This data output is refreshed at every scan, 1kHz = 1/10000 sec., and is interpolated further up to 1/10000 sec x 1/128 to provide even faster response. Here's a little more detail.

Inductcoder's detector comprises a primary and secondary coil; the primary coil is excited by the standard primary ac signal. Our diagram shows that at the designated position in the magnetic field there are two pairs of differentially wound coils. Inside the detector head, ferromagnetic material is moved by mechanical deviation inducing an alternating magnetic flux which is proportional to the displacement in each coil. In this way, two pairs of inductive outputs are obtained (Figures 1 and 2). 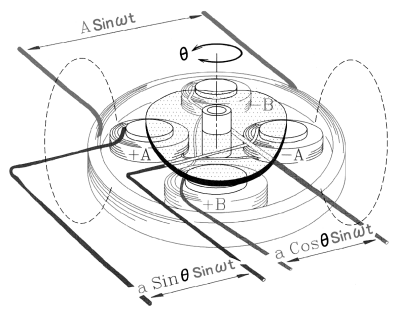 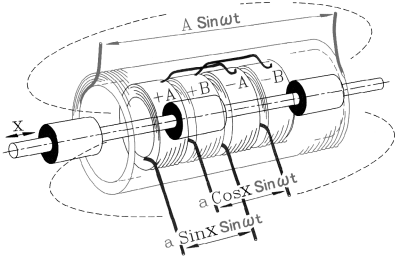 Two signals of different peak values are obtained according to the position of this magnetic material (Figure 3). They are ... 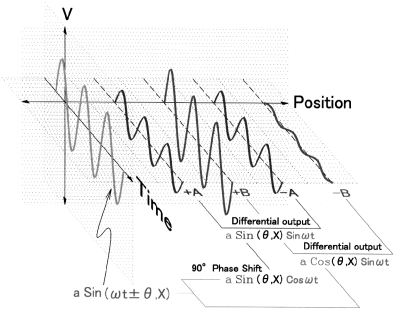 Figure 3 Peaks vary with the position of the magnetic material 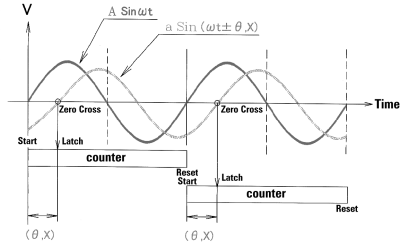 This means that the phase-shifted value compared with the standard primary signal is equal to (θ, χ). Inside the original LSI of the conversion element, a counter synchronizes with the master clock and repeats start/reset every cycle. The zero-cross point of the synthetic signal is detected by the circuit. When the counter is latched at this point, the digital value of the counter at the time is equal to (θ, χ). In this way position data are acquired by counting the phase difference (time) digitally.

Thanks to this phase-difference detecting system, the relationship between amplitude and cable length does not need to be considered. Accordingly, Inductcoder has exceptional repeatability. Minimal temperature drift is assured as compensation for any fluctuation is automatic and as the sensor uses an ac magnetic circuit there is no hysteresis.

This unique device can be specified to suit a wide range of applications including the control of hydraulic and pneumatic systems. Automated semiconductor production is also a prime market for the new sensor. As its detecting element consists of only magnetic coils, Inductcoder is highly resistant to vibration, shock, oil dust and extremes of temperature.

Inductcoder has an analogue output - 0 -10V, 4 to 20mA - and digital output including parallel and series - RS232C, RS422 and CAN-Bus; an incremental and absolute encoder high resolution system is also available. Intelligent outputs for velocity, acceleration, multi-switch and diagnostic signal may also be specified.