Sira to check out the billion star mapper

Sira Electro-Optics Ltd (Plate 1) has been awarded the task of assessing the limitations of charged-coupled device (CCD) cameras in one of the European Space Agency's most ambitious astronomy missions yet planned. 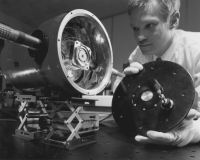 Called the GAIA project, the European Space Agency plans to image the position and annual motion of no fewer than one billion objects from a satellite to be launched in 2009 on an Ariane 5 rocket.

The satellite will then scan the sky and map it over a five year period and will give astronomers considerable knowledge about the evolution of the galaxy.

The core of the scientific payload on the satellite is a three mirror telescope and the imaging device, which consists of a large mosaic array of charged-coupled devices (CCDs).

It is Sira's task to determine how well the selected devices will withstand solar radiation over the period of the mission.

Each CCD device consists of several million photosensitive elements or pixels, which produce tiny amounts of charge. The charges are converted to voltages and ultimately, an image.

But this image can be contaminated or destroyed through the effects of protons blown off from the Sun during solar flares. With energies of several tens of million electron volts, they cannot be stopped by shielding.

The effect of the proton passage through the devices is twofold. First, there is an increase in "dark current" which results in an increase in background noise. This can be corrected by the way the CCD device is operated, in terms of voltages that are applied to it. Providing cooling to the device also reduces the effect, though this is an expensive approach. The second proton induced effect is harder to deal with. Because particles disrupt the crystal lattice, some of the signal charge remains trapped within the device and information cannot be extracted reliably, thus degrading device performance, as the mission progresses.

Sira has built up an unrivalled expertise in this field of CCD performance assessment in simulated conditions, according to Dr Mike Cutter of Sira Electro-Optics Ltd. "We are convinced that we will be able to assist the European Space Agency in the choice and operation of the payload CCDs so that the mission will achieve its scientific goals."