Final pre-launch testing of Global Ozone Monitoring by Occultation of Stars (GOMOS), which has been designed to monitor the earth's ozone layer, has now been completed (Plate 2). The instrument has been integrated onto the European Space Agency's ENVISAT polar-orbiting satellite, and is scheduled for launch in late 2000. 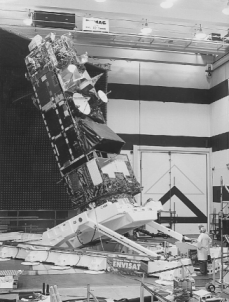 GOMOS contains five light detection modules, all of which were designed and built by Sira Electro-Optics. They consist of near-infra-red and visible/ultraviolet spectrometer detection modules, two star acquisition and tracking units, and a specially designed fast photometer. Their high resolution and stability is crucial to the instrument's performance.

GOMOS observes preselected stars just before they pass behind the earth. As their light travels through the earth's atmosphere certain wavelengths are absorbed, and analysis of the resulting spectrum allows the amount of ozone to be deduced. In this way accurate 3D maps of the ozone layer can be built up. Over the period of its mission, it will be able to measure changes in ozone concentrations as small as 0.1 per cent per year, well below the expected depletion rates.

In addition to monitoring seasonal, latitudinal and long-term trends in ozone levels, GOMOS will measure other atmospheric molecules and parameters, including NO2, NO3, water vapour, aerosols and vertical temperature distribution, to provide a better understanding of the depletion mechanism. It is expected to produce as many data as 360 ground-based stations.

The instrument will be deployed on ENVISAT alongside MERIS, an imaging spectrometer in which Sira played a significant design role, used for monitoring land and water pollution.