Sixth Sense, a gas sensor manufacturer, has gained recognition and approval from a world-leading utilities provider for their SL oxygen sensor (Plate 1). The sensor will now be used in all of their latest gas detectors. The approval comes at the end of a stringent 100-sensor field trial that measured the sensor's performance in specific applications. 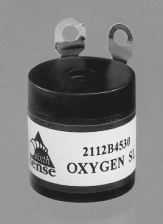 One of the SL's most notable advantages is its ability to overcome problems of condensation. Such problems plague traditional sensors that are typically manufactured within a metal can. When left in an engineer's van overnight, condensation can build up, causing premature sensor failure. For major utility companies, new legislation on confined space entry has led to a heavy investment in portable detectors. Some of the largest organisations will be purchasing in excess of 25,000 units, making condensation a particularly expensive issue. The Sixth Sense SL sensor has been constructed from a high strength plastic which completely eliminates this problem.

The SL is designed to be directly interchangeable with current sensors incorporated into fixed and portable gas detectors. Typical applications include the measurement of oxygen deficiency in confined spaces such as tunnels, mines or chemical plants, or for the analysis of combustion gases in flues and chimneys.