The global automotive sensor industry is in a highly buoyant state. Market volumes are set to continue to expand in all territories for the foreseeable future as car production continues to grow, cars become ever more sophisticated and are required to comply with ever more stringent environmental and safety legislation.

The continued migration of advanced sensors using systems from luxury, high cost or specialist vehicles to high volume mid- and low-range vehicles will boost the global market for automotive sensors from 660 million units in 1997 to over one billion by 2002. Sensors manufacturers, like other suppliers to the automotive industry, will be impacted by price pressures throughout the period. This will be particularly the case for new and emerging sensor types and for those associated with developing systems, such as vehicle stability control. As a result the growth in value terms will be lower but will still result in the market increasing from US$2.8 billion in 1997 to US$4.6 billion by 2002 (see Figure 1). 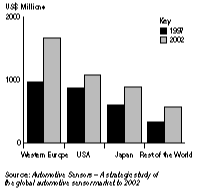 Europe accounted for the largest share of the global market in 1997 and is expected to marginally increase its overall share in the period to 2002 (see Figure 2).

Developments in vehicle technology, whether driven by legislation, the manufacturer through perceived benefits in product differentiation and in cost savings, or through customer demand will be the principal driver in increasing the demand for automotive sensors. This demand will be spread across a wide range of systems and products as indicated in Table I. While some classes of sensors are likely to remain unchanged, technological innovation is rife and microengineered silicon and other solid-state technologies will grow in importance, yielding low cost, high performance sensors for a growing range of physical and chemical variables. In the longer term, smart sensors coupled to digital data highways and fibre optic sensors are expected to play a growing role. 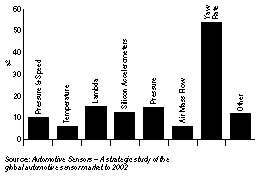 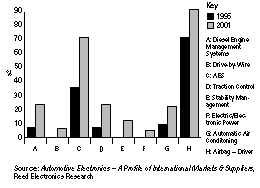 Despite the wide range of new and emerging products the growing trend to system integration will have an overall impact on the number of sensors deployed within the vehicle. For example, systems controlling the engine, transmission, brakes and suspension are all likely to use sensors to measure speed but by integrating these functions the sensor count would drop dramatically. Ultimately the move to complete system integration controlling the engine, gearbox, steering, chassis/suspension and braking will be inevitable, at least within the upper sectors of the car market. However, the growth in new electronic systems and the adoption of sensor hungry applications in the volume segments of the market, as shown in Figure 3, will more than compensate for a decline in sensor usage due to system integration. Table I Anticipated or actual sensor use for advanced automotive vehicle applications