A new level transmitter, which offers unprecedented performance in the most demanding process conditions and remains unaffected by process variables, has been introduced by Magnetrol International.

The Eclipse transmitter is a two-wire, loop-powered, 24 VDC liquid level device with HART® communications, based on the revolutionary guided wave radar (GWR) technology (see Plate 1). Though guided wave technology is new to level measurement, it was first used in the 1930s for underground sensing in communications and geomechanical applications. 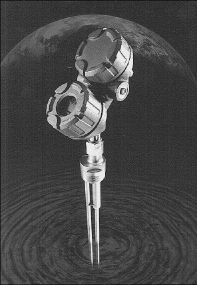 A most important benefit of this operating principle is that because the radar signals travel within a waveguide that is physically in contact with the media, signal loss is minimized. Therefore, process variables such as foam, vapour, turbulence, agitation, low or changing dielectrics or shifting densities, that inhibit the performance and accuracy of existing level measurement technologies, do not fool Eclipse.

Unlike RF admittance/capacitance devices, Eclipse does not require a level change to be calibrated. This means the unit can be set up, without level simulation tools, in the comfort of a workshop, ready to be installed on the tank in minutes.

The radical design of the housing was developed following extensive discussions with end-users who expressed a preference for a dual-compartment design, often found on pressure/DP cells. This design keeps the electronics protected in one compartment by locating the connection terminals in the other compartment. The Eclipse housing locates both compartments in the same direction for ease of wiring and calibration. Also, because they are tilted at an angle of 45°, the compartments are easy to access when mounted on the top of a probe.

The quick-disconnect, high frequency coupling means the housing can be attached to the probe in seconds. This design also enables the housing to be rotated 360° to provide the optimum wiring and viewing angle.

Two probes offer application flexibility in a wide range of liquids from light hydrocarbons to water-based slurries, at temperatures to +200°C (+400°F), pressures to 50 bar (700psig) and lengths from 60 to 610cm. Approvals include CENELEC intrinsically safe, FMICSA intrinsically safe and explosion proof.

Throughout the history of industrial instrumentation there have been numerous occasions where a new technology is launched accompanied by claims of the dawn of a new era in measurement due to enhanced performance. Industrial level measurement has witnessed several, such as pressure/differential pressure, RF admittance/capacitance, ultrasonic, nuclear and magnetostrictive, to name a few. During recent years, new radar transmitters have been released into process markets that hold great promise. To many people, radar is the "be-all-and-end-all" in level measurement technology, the answer to all level measurement applications. But is it?

On initial observation, radar level transmitters seem perfect. The antenna does not contact the process liquid, the high frequency, electromagnetic signal travels easily over long ranges, and the measurement is unaffected by changes in the process media. Initially, many manufacturers believed their only challenge was to reduce the price of radar to the point of being competitive with ultrasonic transmitters, at which point it would corner the market. However, as more radar transmitters are being installed, flaws in their character are coming to light. Such as:

In addition with spurious signals due to mixers, piping, ladders etc., it is a wonder radar transmitters are as effective as they are.

Remember, these units are line-powered devices that contain powerful microprocessors and some of the most sophisticated signal processing in the industry ­ just to measure the level. Even so, most radar manufacturers de-rate their transmitter's performance in the presence of such "complications", or refuse to apply them at all.

Why a wave guide?

In a perfect world, all measurement would be non-contact to the media, even non-invasive to the vessel. However, in the real world, daily we sort through the various strengths and weaknesses of different measurement technologies searching for the one that best solves the application at hand. Guided wave radar uses a wave guide (probe) to yield solutions to these tough applications by offering the performance of conventional through-air radar but with distinct advantages of its own: 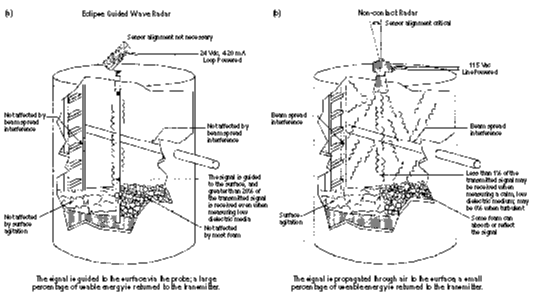 The hardware is much less expensive than conventional radar transmitters and installation costs are kept to a minimum. Loop power, of course, offers significant technical obstacles to developers; 4mA @ 24VDC offers very little in the power budget. The output at the antenna must be significantly reduced by launching less energy and processing is done with less-powerful microprocessors and averaging the return signal over a longer time period.

Remember the application problems associated with through-air radar; low dielectric media, turbulence, foam, obstacles in the vessel. The question is, if expensive line powered transmitters that use powerful microprocessors and sophisticated signal processing have problems with these applications, what are the chances for a loop powered device?

The choice is clear; install a probe (wave guide) which comes in contact with the liquid, and achieve the measurement performance of the expensive, powerful radar transmitters (see Figure 2). Superior performance over conventional level measurement technologies in a variety of difficult applications abounds. Guided wave radar is not affected by process complications such as; low and varying dielectric (RF admittance/capacitance), varying specific gravity (torque tube and pressure/dp), vapours/foam/turbulence (ultrasonic). 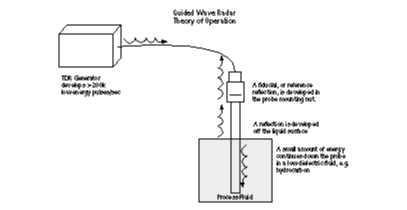