When coupled with a Cognex machine vision system, PatInspect performs far beyond the capabilities of previous machine vision inspection technologies, which are limited in their ability to reliably locate defects within an image while ignoring acceptable variations in appearance resulting from normal manufacturing processes. Incorporating Cognex's revolutionary PatMax object location technology, PatInspect breaks through these constraints, finding defects on an object even when it has been rotated or its scale has been changed from the original, trained position. Additionally, it can reliably detect flaws along the edges of an object ­ areas where previous technologies have traditionally had trouble (see Plate 5).

"Existing inspection technologies cannot adapt to many of the variable conditions found in the manufacturing process, forcing manufacturers to maintain tight control over part position and optical settings in order to reliably inspect parts", explains Colin Graves, sales manager of Cognex UK. "These methods have trouble discriminating between acceptable variations in a part and those defects that can cause real problems. By adapting to widely varying conditions and understanding which defects are real, PatInspect will help manufacturers increase yield and overall product quality."

PatInspect makes available to the user the full power of Cognex's PatMax technology, which is able to locate and measure objects at any angle or size while detecting accurately described differences in an object. PatInspect first locates an object and then employs a high speed, high accuracy interpolation algorithm to translate the runtime image to the exact location, orientation and scale of the model image. PatInspect can then inspect for intensity or grey-scale differences, boundary differences or both. 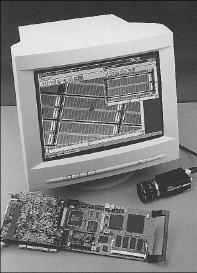 To find intensity differences, PatInspect subtracts the aligned runtime and model images, with the resulting image indicating the differences in grey-scale values of the two images. For differences on or near boundaries, the software uses a unique geometric feature detector to locate features in the runtime image and compare them to those found in the model image. The resulting differences can be categorised as missing, extra or background.

Finally, PatInspect analyses both intensity and boundary differences and uses a defect classification tool that compares the result to a set of user-defined criteria to determine whether to accept or reject the object based on defect characteristics. Defects can also be classified by a certain type, helping users understand and control what is happening in the manufacturing process.

Colin Graves summarises, "PatInspect will significantly increase machine vision performance in a range of inspection applications. In semiconductor manufacturing, for example, a Cognex vision system with PatInspect can accurately inspect die, lead frames, probe marks, and IC marks for defects. Additionally, the software will be used for varied general manufacturing applications, such as inspecting the print quality on packages and bottles".