Automatic identification and data collection equipment (AIDC) is one of the fastest growing markets in Europe. Indispensable to a continuously increasing variety of applications, AIDC is here to stay. However, in an increasingly technologically complex environment, the AIDC market is set for considerable change, concludes a new competitive benchmarking study by Frost & Sullivan, the international marketing consulting company.

Applications include the transfer of money using ATMs, transportation tickets and passes using magnetic stripe cards, access control cards, EAS and barcoding. Change will be stimulated by the growing usage of RF, smart cards and biometrics. They will often be combined with each other, and with magnetic and optical recognition (see Figure 2). 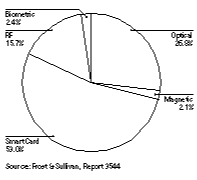 As a result, the existing lines of product category demarcation will become less relevant ­ possibly even obsolete. Frost & Sullivan expect the European AIDC market to rise from its 1997 revenue level of US$4.90 billion to reach US$11.51 billion by the end of the study period in the year 2004, representing a compound annual growth rate of 13.0 per cent.

Maria McFaul, research manager at Frost & Sullivan, says: "This is a high rate of growth for a European market, but it is lower than the recent growth rate, and lower than that currently being achieved".

Maria McFaul continues: "Magnetic recognition, one of the two mature market sectors, is facing growing competition from smart cards, but some applications will combine both technologies and magnetic recognition will remain as an important function, at least into the foreseeable future. Biometrics, the most interesting sector in the market, are also forecast to develop rapidly".

The commercial and industrial application of biometrics in Europe is in its infancy. However, in combination with equipment from other product sectors, the usage of biometrics is likely to play an increasingly important part in the overall development of the market. Frost & Sullivan note that most manufacturers are focusing on one or two product sectors.

However, systems integration increasingly combines equipment from two or more categories and the larger manufacturers are particularly likely to become more involved with several product categories.

Other than the manufacturers profiled in this study, there are at least another 40 manufacturers marketing AIDC equipment in Europe, but with the exception of several German and Japanese companies most of them are comparatively small. Although the acquisition activity is high, the market remains fragmented and the trend towards concentration is only having a gradual effect. Many of the larger manufacturers have recently undergone restructuring and cost reduction programmes; all of them are continuously seeking to increase productivity and reduce costs.

Innovation and product development are at the forefront of manufacturers' agendas and the necessity to keep up with advancing technologies and the introduction of new products and systems are acknowledged as essential to maintaining and developing market positions.The rate of growth in Europe is below that of some of the developing areas such as Asia Pacific and Latin America, but the size of the European market and its growth potential make it an important source of revenue growth for the manufacturers that are established in the market.

All AIDC manufacturers emphasise the importance of customer service and the price, quality and reliability of their equipment. Investment in research and development is also vital to keep up with advancing technologies.

Maria McFaul concludes: "All the companies profiled regard AIDC as a growth market with considerable potential. Their strategies are aimed at achieving optimal sales and profits growth. Other developments in IT are also likely to have an expanding effect on AIDC. In Europe, this still has a real opportunity to make further contributions to the effective, less costly and more profitable delivery of commercial and industrial activities".